This article covers the various depictions of Count Iblis from the tie-in novelizations, comic books, and other media.

Iblis is one of the few pivotal "one-shot" characters never to have appeared in the Marvel comics.

It is noted that both Dynamite's aforementioned Original Series stories have their own disparities, and are treated thusly. 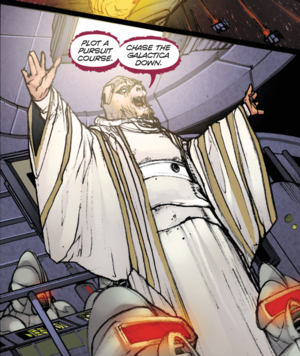 Iblis reassumes his true form after his failure to wipe out the Seraphs, the humans who shunned him, and even his Cylon creations (Classic Battlestar Galactica Vol. 3 #5).

In Iblis' first Dynamite appearance, he returns to unleash his plan to destroy the Seraphs by creating a black hole that transports The Fleet — and Lucifer's pursuing basestar — to another realm. Said realm features a planet where his pig-like brethren have been laid to rest after a disastrous end, much like the red planet previously encountered. On this planet, Cylons and other wayward space travelers are shipwrecked after falling through the black hole; Iblis uses the Cylons to his own advantage, creating the Meclons and bolstering their numbers by hunting down survivors of the shipwrecked vessels and repurposing their bodies (Classic Battlestar Galactica Vol. 3 #1-#3).

Iblis returns to his failed trap of a planet, shedding his human visage and reassuming his true face, and resurrects his like-faced followers in his quest for vengeance against the surviving humans, their new Cylon friends, and the surviving Seraphs (Classic Battlestar Galactica Vol. 3 #5).

In Iblis' second Dynamite appearance, Iblis enters into a relationship with Kali, the exiled creator of the robotic life that assumed her race's name and identity. At his bidding, Kali builds a wormhole between two different Battlestar Galactica universes (the Original and the Re-imagined) in a bid to exact revenge against Adama and his Fleet. Assuming influence over Cain, Iblis reunites Cain and Pegasus with the two disparate Fleets in order to undermine the humans' efforts against the Cylons—however this does not go to plan as Cain is able to break Iblis' and Kali's hold over him, and thwarts Iblis' revenge bid (Battlestar Galactica vs. Battlestar Galactica).

Iblis is responsible for allowing the Cylons to follow the Colonials to Earth, and his powers have increased since the previous encounter.

Iblis is indirectly responsible for slaying Adama (although Adama himself is terminal), who stays behind on Adam and Eve's ark to learn about the ancient Kobollian technology. This event occurs during the Cylon attack, when Adama protects Adam from being slain by Baltar, who Iblis transports to Earth (War of Eden 1—4). 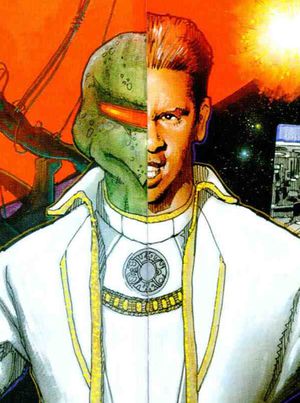 The two faces of Iblis: reptilian Cylon and human.

At the dawn of the first millennium of man, Count Iblis convinces the Cylon dictator Sobekkta to create a race of robotic creatures that would later take on the name "Cylon," after the extermination of their reptilian creators. Due to this interference and other transgressions, he is sentenced to "live only in death" for 7,000 yahren (Eve of Destruction - Prelude I: Nostalgie De La Boue). It is after his sentence ends that he encounters the humans fleeing from the robotic Cylons and attempts to subjugate them, resulting in the events depicted in "War of the Gods."

Amongst Iblis's powers, he is also capable of changing his appearance. To the Colonials, he appears human; to the reptilian Cylons, he appears as a green-skinned Cylon with a singular eye slit (Eve of Destruction - Prelude I: Nostalgie De La Boue).