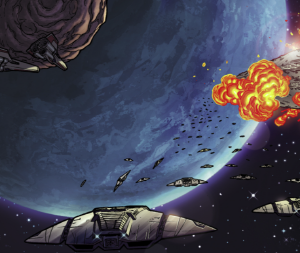 The infidel basestar is battered above the planet Burania, observed by Captain Apollo and Lieutenant Starbuck (Battlestar Galactica: Cylon Apocalypse #1).

Burania is a watery planet in proximity of the Canopus wormhole and the Korax nebula.

While its atmosphere is sufficiently pressurized to allow humans to walk on its surface without pressure suits, the atmosphere itself is unbreathable.

An "infidel basestar" is shot down by other Cylons and crashes on the planet.

Apollo and Starbuck investigate the basestar wreck and are attacked by a strange monstrous organic blob. Escaping the basestar, they find themselves caught between the bombs from incoming Cylon bombers and the approaching monster blob, and narrowly escape the basestar's total destruction.

The Warriors leave Burania to report their findings and their recovery of the later-identified nano-cybrid substance, but are unaware that a stealth Cylon Centurion unit has followed them from the planet (Battlestar Galactica: Cylon Apocalypse #1).