There are at least three variations of Athena from the Dynamite Entertainment comics, including: 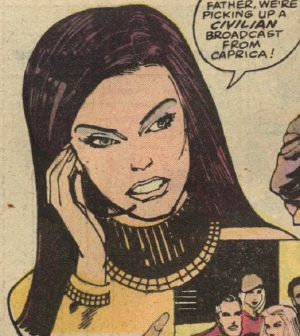 Athena reports on a transmission Galactica receives from Caprica during the Battle of Cimtar (Annihilation!).

Athena is Adama's aide-de-camp during the final assembly of President Adar's Quorum of Twelve, piloting the shuttle between Atlantia and Galactica en route to Cimtar.

As Galactica approaches Caprica, she receives Serina's newscast transmission just prior to the Cylon attack on Caprica City (Annihilation!).

Athena shares her concerns with her father regarding the treacherous, alternative route to Carillon, supporting Sire Uri's contention that Borallus would have been a better alternative (Exodus!). She is pleased to have been proven wrong, as she is impressed that her brother and his two wingmen, Boomer and Starbuck, are able to clear a path a 100 maxims wide despite their sole reliance on Galactica's scanners for targeting the Cylon mines (Deathtrap!).

While in combat with Cylon Raiders, Athena's Viper vanishes. She is magically transported to a strange world inhabited by Res, a shapeshifter in search of love. Apollo and Starbuck arrive to rescue Athena. Res reveals that he also brought Athena to the planet to help him transcend his mortal form. Athena fires a laser at Res at his request, and Res ascends to the next plane — his voice resonates from the grave as the Colonials leave and the planet explodes, assuring her that what Athena did was right. It should be noted that the Cylons they encountered were part of the illusion as well (A World for the Killing!).

Twenty yahrens after the events of the Original Series, Athena achieves the rank of colonel and has moved on from Starbuck, even after her former rival, Cassiopeia, died yahrens prior.

A Cylon humanoid named Ares joins the Colonial fleet with the intention of sabotage. Before doing so, he romances Athena and beds her (The Enemy Within #1—#3).