This article covers the various depictions of the Original Series's Baltar from the tie-in novelizations, comic books, and other media.

Baltar comes from an aristocratic heritage, as his mother is described as being "overbearing and aristocratic". Furthermore Baltar was known to have been caught by his mother in an earlier betrayal of unknown nature.[1] He also attends the Academy at the same time Adama does as cadets, often meeting one another during Academy Chorus practice, where Baltar's voice is noted to be a shaky tenor. During this time, his rivalry and envy of Adama's abilities blossom, resulting in his failed attempt to reprogram a test-computer to result in higher test scores. Baltar is caught and asked to leave the academy by both the Core Faculty and the Cadet Council.

Baltar leaves the academy, and the scandal is covered up with the official excuse for Baltar's leave attributed to health-related concerns. During this scandal, Adama attempts to intercede on his behalf, which only makes Baltar angrier.[2]

With his dismissal from the Academy, Baltar enters politics, acquiring immense wealth and a seat on the Council of Twelve in the process. However, he is considered a political failure, as every committee and key decision he wants to be a part of is denied to him. Embittered, Baltar makes various scrupulous and devious wartime deals, leading to his decision to sell out the human race to the Cylons.[3]

Association with the Cylons

After the Cylon holocaust, Baltar is spared execution by Lucifer, despite the Imperious Leader's order that he be executed. In secret from the Imperious Leader, Lucifer saves Baltar for the purposes of his plan, which is to use Baltar to analyze the human race and determine an effective means to destroy them.[4] However, given that Baltar is "overweight, out of condition, flaccid from too much indulgent living", Lucifer places Baltar on a diet, as well as physical and mental regimens for him to be an effective component in his plans.[5]

Once Lucifer's training programs are concluded, Lucifer presents Baltar to the Imperious Leader. The Leader tasks him with destroying the Fleet, with Lucifer as his liaison and a basestar under his command, in return for a full pardon. As part of his deal, he desires a throne room of his own, in addition to Lucifer's reprogramming to make the robot subservient to him, reversing the tables against his former master.[6] 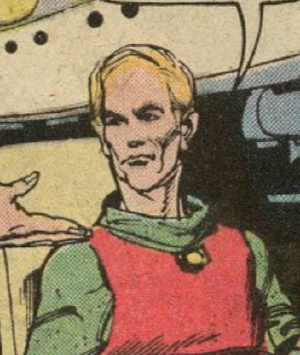 Baltar at President Adar's celebratory feast prior to the deception at Cimtar (Annihilation!).

Baltar is a member of the Quorum of Twelve and is the Quorum's liaison to the Cylons during the armistice negotiations.

Baltar's achievement is celebrated in a final meeting of the Quorum en route to the location where the armistice is to be finalized. After Galactica's recon patrol happens across the staging area for the trap, Commander Adama--who does not yet have full understanding of the situation--beseeches President Adar aboard Atlantia to launch support craft, but Baltar advises Adar to prevent launching so as to not cause any issues during the armistice proceedings.

Baltar later absconds from Atlantia before it is destroyed during the Battle of Cimtar (Annihilation!). 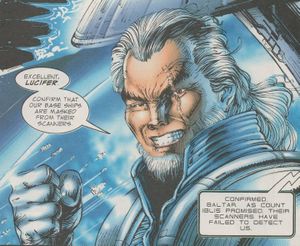 The re-imagined Baltar from the Maximum Press comic book series.

20 yahrens after the events of the original series, Galactica finally discovers Earth, but Baltar is right behind them, once again leading a Cylon force. Count Iblis teams up with Baltar and teleports him to Earth where he shoots and kills Adama. The Cylons attack Galactica only to be thwarted by the surprise return of Commander Cain and the Pegasus (War of Eden 4).

Later, Baltar has a humanoid Cylon named Ares infiltrate the fleet in an attempt at saboutage, but the scheme fails (The Enemy Within).

There are two noteworthy depictions of Baltar in Dynamite Entertainment's comic series:

In the Eve of Destruction story, Prelude I, Baltar's name is remembered by Count Iblis during one of his lives in between mortal deaths over his 7,000 yahren sentence.