Adama is a Caprican serving in the Colonial Military during the last stages of the Thousand Yahren War and a lone battlestar commander following the Cylon Holocaust.

As a Viper pilot and Captain aboard battlestar Rylon in 7322, he and wingman Tigh are the first Warriors on site during the attack on Umbra, Caprica.

As they attempt to fight off phalanxes of Cylon Raider, Adama is shot down and crash-lands into the Thorn forest near Umbra. What seems to be a certain demise by a damaged Centurion is thwarted by a young, hurt orphan boy who attacks the Cylon before it can kill Adama. Adama is able to blow off the distracted Centurion's head, and radio for medical assistance, as the orphan boy was electrocuted during his assault on the Cylon (Battlestar Galactica: Starbuck #1).

Adama is promoted to Flight-Major by 7328, and his son Apollo is a cadet training to be a Warrior (Battlestar Galactica: Starbuck #1).

With his wife, Ila, Adama resided on Caprica in an affluent home, complete with servants.

In 7322, his wife is pregnant with their third child. The child's name is a point of contention: Adama desires to name the boy "Starbuck," while Ila wishes to name the boy "Zac." It isn't until after the aforementioned young orphan boy saves his life in the attack on Umbra that Adama relents to naming their child Zac—simply because he names the orphaned, amnesiac boy "Starbuck."

In 7328, Starbuck arrives at Adama's home and asks Adama to sponsor his application to become a Colonial Warrior, despite the fact that Starbuck's foster parents could have done so—but wouldn't have. Adama initially rebukes this, leading to Apollo—a first-yahren flight cadet—to challenge Starbuck to a turbocycle race down Mount Colicos. This race leads to bonding between the two, particularly as the race goes wrong and results in the destruction of both participants' cycles, as well as Adama being pressured into sponsoring Starbuck as a Warrior (Battlestar Galactica: Starbuck #1).

In the yahrens that follow, Adama finds himself continually searching for clues to the Thirteenth Tribe's path, as well as evading the Cylons. 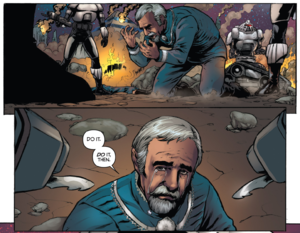 In his nightmares, Adama begs for death by the hand of the very Cylons who killed his wife, Ila (Classic Battlestar Galactica Vol. 2 #1).

In the yahrens that followed, Adama faces innumerable challenges and mental anguish, and began altering his facial appearance by growing a goatee and mustache. Suffering from a form of post-traumatic stress, Adama experiences recurring nightmares of the Battle of Cimtar, all of which center around his failure to protect Caprica and his wife, Ila. The typical nightmare ends with Adama, on his hands and knees, begging a Centurion for death (Classic Battlestar Galactica Vol. 2 #1).

Following the Nebula Ambush and Apollo and Starbuck's return from an alternate reality, Adama's dreams turn towards Earth, unequivocally believing that Earth lies in the center of a storm zone (Classic Battlestar Galactica Vol. 2 #7). This fervent belief in this questionable discovery, particularly when an alleged artifact is discovered in the very place Adama sees Earth, leads not only to questions about Adama's competency by members of his own family but also concerns from his stalwartly loyal executive officer, Colonel Tigh (Classic Battlestar Galactica Vol. 2 #8). With threats of being relieved of duty on psychological grounds, Apollo convinces Adama to craft a "handshake signal" message to the phantom colony, leaving Tigh in command while Athena, Apollo, and Starbuck uncover the source of these illusions: Xam, whose formerly unknown psychological powers are considerably enhanced by the storm zone (Classic Battlestar Galactica Vol. 2 #9.

Leaving the storm zone, Adama begins questioning his own decisions, and later attempts to abdicate command, recruiting Doctor Madusa to assist him in choosing a successor (Classic Battlestar Galactica Vol. 2 #10. However, he regains his will, and elects to retain command following the success of the eponymous battle known as Adama's Gambit (Classic Battlestar Galactica Vol. 2 #11).

Peace with the Cylons 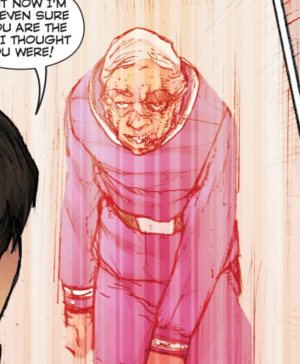