{{disline|This article presents timekeeping in the re-imagined series and }} Caprica. For the specific chronology of events, see Timeline (RDM).

A hypothetical Colonial calendar would be common to the Twelve Colonies, but aside from their use of terms such as "day", "month" or "year", there is little information about a system from which the units would theoretically derive. We don't even know whether all the colonies use one method, as opposed to individual, colony-based calendars.

Specific dates were usually avoided in the re-imagined series; the most detailed depiction of an actual calendar comes from the dossier of William Adama's career in the episode "Hero" (see below). Dated props such as memos, awards, letters and similar items were photographed for various auctions, revealing styles of dates ranging from seemingly random alphanumerics to inconsistent year numbers. The diversity of dates strongly suggests that no definite system had been established for the re-imagined series.

On the other hand, the Caprica series and the associated materials contain prominent and much more consistent references on the same kinds of items, indicating that the producers eventually worked out a method which is based on the Roman calendar. Dates in that style were also used in the Syfy blog The Caprican, which therefore revealed much of the basic calendar structure. However, since the series rarely took us to other colonies, it remains unclear whether the calendar is specific to the planet Caprica or common to the twelve worlds.

The units used to express timespans in the re-imagined series and Caprica appear to be identical to those of the Gregorian calendar, with 24-hour days and approximately 365-day years. The best example of this is in "Tigh Me Up, Tigh Me Down," where Baltar says that each of his tests takes 11 hours. As there are 47,905 tests, amounting to 526,955 hours' worth of tests, this would have taken him 21,956 days or 60.1534 years (as confirmed by Baltar's Messenger Six). 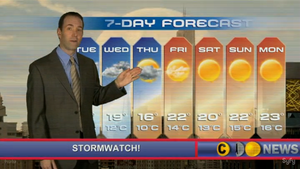 Weather forecast featuring all seven days of the week

Although the calculation uses an average year of 365 days, without taking into account leap years, it could be due to a mistake rather than a deliberate revision. A year comprising 52 weeks is revealed in "Rebirth" during the airing of a Cubits & Pieces clip. Further, days of the week are gradually introduced in this and later episodes: Saturday (CAP: "Rebirth"), Monday (CAP: "Gravedancing") and Wednesday (CAP: "Ghosts in the Machine"). All seven days are finally shown onscreen as part of a weather forecast (CAP: "Retribution").

Ronald D. Moore addressed the units of time on his blog: "I dropped many other terms from the old show like 'centon' (a unit of measurement) and 'yahren' (year) because I felt they distracted from the mood I was trying to create and they sounded a bit silly to my ear." Nevertheless, the word yahren does appear in the Cylon specifications examined by the Armistice Officer (TRS: "Miniseries, Night 1").

The Calendar from Caprica

Building upon the units described above, Caprica introduced its own system which is relatively consistent and widely used on various props.

Apart from its epilogue and flashbacks, Caprica is set in YR42. Years before YR0x are expressed as YR9x, while ancient dates can be longer than two digits and designated "byr". SergeGraystone explained that "YR means 'year' and 42 represents the last two digits of the year." When asked about the era, he stated that the present day is "1,942 years since the human exodus from Kobol."

The table below collates months and days per month from all sources, matching them to the Gregorian calendar.

The most frequent names are identical to those in the Roman calendar, but there appear to be variations as well: Junius, June, Aprilus, Sextilius.

The date components can be formatted in many different ways. Some examples, in no particular order:

Evidence from the series

Reins of a Waterfall 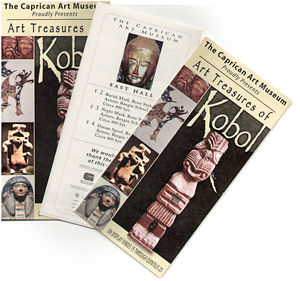 Guides to artifacts dated at around "400 byr".

The Imperfections of Memory

Ghosts in the Machine

Things We Lock Away 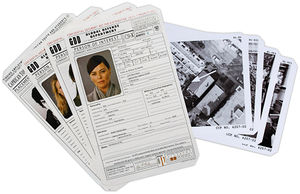 The Profiles in History auction of four posters from Daniel's private game box revealed a number of playoff dates, confirming the months of Quintilis and September. In some of the layouts, the 'YR' prefix is written with a smaller font size than the rest of the date, indicating a possible stylistic alternative. 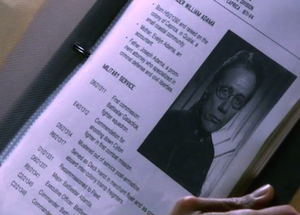 In "Hero", William Adama's dossier can be clearly seen. While this document is fairly accurate in terms of Adama's personal history, the calendar scheme used in the document seems to be flawed, particularly in lieu of previously established methods of timekeeping demonstrated in the series.

Here are a list of dates from Adama's past that Adama's dossier contains:

This provides some interesting information. The fields in the format X#/##### appear to be dates, with the five-digit string following the solidus apparently corresponding to the year.

The following can be deduced from this document:

Additionally, an error occurs in "Hero." Dialogue from this episode claims that Adama served on Valkyrie one year prior to the Fall of the Twelve Colonies, putting the date of Lt. Daniel "Bulldog" Novacek's capture at 21352-53. However, Adama's command of Valkyrie ended in 21348, which means that Adama commanded Galactica for eight years. It has already been established in dialogue from the Miniseries, "Act of Contrition", and "The Farm".

If the five-digit string following the solidus is in fact the year, as seems inescapable based on the above, the letter-digit sequence before it must indicate the position in the year. There are 260 unique letter-digit sequences of that format, which may indicate a shorter year in the calendar, essentially a year of twenty-six ten-day weeks. However, what has been revealed about Colonial timekeeping is too incomplete to draw any conclusions.

However, if the above is to be inferred, a striking inaccuracy occurs because of this service record. Prior episodes have firmly established that the Colonial year is analogous to one Earth year of 365 days. In "Tigh Me Up, Tigh Me Down", the Cylon detector takes 11 hours to thoroughly test each blood sample. As there are 47,905 tests (526,955 hours) this will take him 21,956 days, which Six then computes will take approximately 60 years, the same as it would here. The timespans further established in "Lay Down Your Burdens, Part II", "Battlestar Galactica: The Resistance", and "Occupation" also support this comparison.

On the other hand, the Colonial numerical system may start with the numbers zero through 99, then continue with A1 through Z9, followed by AA, AB and so on. This would mean that the first day of the year is 1 and the last day, the 365th, is represented as AF.

It is astonishing to learn that the Colonials have -- or believe they have -- over 21,000 years of recorded history. By comparison, Pythia was said to have recorded her prophecies 3,600 years ago (TRS: "The Hand of God") and the Great Exodus from Kobol took place just 2,000 years ago. On Earth, Human civilization is only about 6,000 years old.

The system used in the dossier is only the most prominent example of dates in the re-imagined series. A closer analysis of other items reveals a number of different methods. It is unclear whether these were actual calendar proposals or random alphanumerics which were never intended for closer inspection.