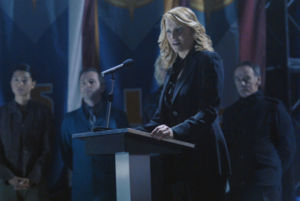 The Cylon Occupation Authority is a group of Cylons assigned to govern over the trapped Colonials inhabiting New Caprica (TRS: "Occupation").

While the Cylons are officially present only as "allies and friends of the legitimate Colonial government", they are in reality in complete control of the planet. The occupation authority attempts to rule by consensus, but as a copy of Number Three notes, the strains of occupation make consensus more difficult to come by. The Cylons also attempt to maintain control by working alongside humans in more helpful roles; at least one Number Six works in waste reclamation (TRS: "Faith"), and other Cylons assist human farmers in tending and harvesting crops (TRS: "Battlestar Galactica: The Resistance").

While all twelve Cylon models are on New Caprica, only the following members of the Significant Seven take part as the Final Five believe themselves to be human: