Logo of the GDD.

The Global Defense Department (GDD) is an internal law enforcement and intelligence service on the colony of Caprica, operating under the Caprican Department of Justice.

In the years before the Fall, the GDD has an underfunded bureau in Caprica City run by Director Gara Singh. Prior to the resurgence of the Soldiers of the One, agents of the GDD were tasked with routine investigative work, including stopping kids for curfew violations (CAP: "Reins of a Waterfall"). 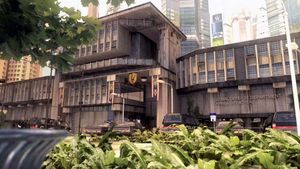 Following the STO attack on the MLMT train in Caprica City, Agents Jordan Duram and Youngblood are assigned to investigate and capture the organizers of that terrorist act ((CAP: "Pilot"), "Reins of a Waterfall").

Recovering a suspicious message sent from an E-sheet moments before the train exploded, Duram focuses his investigation on Zoe Graystone, rather than her boyfriend Ben Stark - the real perpetrator (CAP: "Pilot"). Embarrassed by footage of Agent Youngblood interrogating Stark some months for the bombing for a routine curfew violation, the agents channel all of their energies into pinning the attack on Graysotne. Following Amanda Graystone's public revelation of her daughter's involvement with the STO, Duram and Youngblood alert the Caprica Tribune to "bureaucratic red tape" preventing them from searching the Graystones' home, causing public outcry (CAP: "Reins of a Waterfall"). Awaiting permission to search the Graystones' home, Duram and Youngblood search student lockers at Athena Academy, but come up short. Finally securing a warrant from the high court on Libran, Duram and Youngblood and a contingent of GDD agents conduct a thorough search of Zoe Graystone's bedroom, removing most of her belongings and placing them into evidence (CAP: "Gravedancing").

Still, the investigators come away with little in the way of solid evidence proving Graystone's involvement in the bombing. Unable to pin Zoe to the crime, Duram and Youngblood extend their investigation to include any known members of the STO, securing funding for new equipment capable of facial recognition (CAP: "Know Thy Enemy" deleted scene). Casting a wide net, Duram and Youngblood focus on the involvement of Clarice Willow after two of her former students with ties to the STO - Pann and Hippolyta - turn up dead (CAP: "Retribution").

Aware of Amanda Graystone's close relationship with Willow, Duram turns to her personally, persuading her to provide information about the suspected STO ringleader (CAP: "Retribution"). Though Graystone is at first hesitant to work with the GDD, she begins acting as a covert informant, moving in with Willow and her family and reporting back to Duram (CAP: "False Labor").

After discovering evidence is missing from the GDD evidence locker, Agent Duram begins to suspect there is a leak within the department. With pressure from Director Singh to reveal the identity of his CI, Duram provides false information indicating Clarice Willow's wife Mar-Beth - not Amanda Graystone - as his mole. Shortly thereafter, Willow informs Duram that Mar-Beth has gone missing, coinciding with the discovering of a body matching Mar-Beth's description (CAP: "Blowback").

Believing Director Singh is the leak, Duram is openly defiant, resulting in his suspension. With Agent Youngblood taking over his caseload, Duram is temporarily out of contact with his CI Amanda Graystone who is left to operate on her own (CAP: "The Dirteaters"). Acting in an unofficial capacity, Duram eventually reconnects with Graystone and the two continue their investigation, focusing on Clarice Willow's personal holoband. Duram provides Graystone with a dummy holoband and persuades her to swap it with Willow's, meeting in Orpheus Park to make the exchange. As the two part company, a sniper's bullet catches Duram, however Graystone is on hand to provide first aid and call the paramedics (CAP: "The Heavens Will Rise").

With Duram incapacited, Amanda Graystone and her husband Daniel Graystone continue the pursuit of Clarice Willow, discovering her plans to bomb Atlas Arena. Realizing the Graystones are close to uncovering the conspiracy, Director Singh begins actively assisting Willow and her STO cell. Using his influence over the GDD, Singh pins the MLMT bombing on Daniel and Amanda Graystone, publicly labeling them terrorists. On the run from the GDD, the Graystones become fugitives. Utilizing backdoor access to a squadron of Marine Cylons, Daniel Graystone is able to prevent the bombing and expose Willow, and clear his and his wife's name (CAP: "Apotheosis").