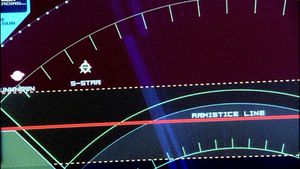 The Armistice Line was the border between Cylon and Colonial territories, drawn out by the Cimtar Peace Accords. The armistice line passed through star systems, near planets at points, and at times, breaching the armistice line proved to be tempting to some colonists for the purposes of resource exploitation.

Six years[1] prior to the Fall of the Twelve Colonies, Commander William Adama of the battlestar Valkyrie was ordered by Admiral Peter Corman on a secret mission to reconnoiter Cylon space in order to evaluate the scope of their potential military operations. To do so, Adama sent Lieutenant Daniel Novacek in a stealth ship over the Armistice Line, where Novacek was intercepted by a lone, unidentified enemy transient.

In a vain attempt to cover up the trespass, Adama fired a ship-to-ship missile at the now-stricken stealth craft, destroying it. Unbeknownst to the Commander, Novacek had managed to eject from the craft prior to its destruction and was subsequently captured by the Cylons.

Up until the time of Novacek's return after the Second Exodus, and resulting interactions with Saul Tigh and President Roslin, Adama had believed that this trespass could have led to the Cylon attack against the Colonies (TRS: "Hero").