For information on a book based on the Original Series universe, see Resurrection (book). 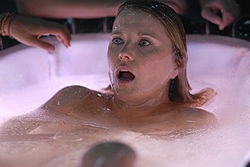 Resurrection is the term that refers to the process wherein the consciousnesses and memories of a Cylon whose body had been destroyed are captured and recovered.

For resurrection to occur, the dying Cylon must be close to a resurrection ship or hub, otherwise his or her consciousness risks being permanently lost. The transmission method of a Cylon's consciousness has not been explained, but a form of wireless is probable. Resurrection points identified include the Cylon homeworld, the central Resurrection Hub, Resurrection Ships, and planet-based facilities. A rebirthing facility may have existed on occupied Caprica. Within each resurrection point is at least one rebirthing tank, where a duplicate body is immersed in a thick opaque substance to await download (TRS: "Downloaded").

Resurrection affords the Cylons a great tactical advantage in war, as it enables them to carry out suicidal attacks without fear, learn from their deaths to improve their strategy, and fall back to their home base by dying in order to escape capture, nullify a debilitating injury or transmit information. The Cylons are able to sustain themselves as a society indefinitely so long as Resurrection is intact, without having to fear death by natural causes. This fact is especially important in light of the Cylons' difficulties in achieving sexual reproduction.

While humanoid Cylons appear to be able to be resurrected indefinitely, two problems can occur. Repeated downloads can cause pain and other unexplained symptoms. A Cavil reports severe headaches after one resurrection, and a sensation that felt like "a white hot poker in my skull" in a following instance (TRS: "Exodus, Part I"). Far more threatening is if a humanoid Cylon's memories have become compromised, corrupted, or otherwise tainted (from the perspective of other Cylons). If that occurs, the consciousness might be "boxed" immediately after download while the reborn Cylon is in the tank and unable to resist, a drastic measure equivalent in Cylon society to capital punishment. Conversations suggest that this practice is very rare, and Number Three is the only case of an entire model line being boxed (Downloaded, Rapture).

When a humanoid Cylon is downloaded, his or her memories are added to a collective database and can be accessed by another Cylon of the same model. This is not automatic; the Cylon receiving his or her counterpart's memories must choose to do so (TRS: "The Hub").

One apparent side effect of resurrection is the restoration of blocked memories: when Ellen Tigh is killed by her husband and downloaded, the memories that Cavil had blocked following her previous download and insertion into Colonial society come back to her shortly after resurrection (TRS: "No Exit").

The process of Resurrection

Very little is known about the mechanics of downloading, other than what can be inferred and comments made from official crew members. Not all Cylons of the same model line share the same knowledge, and thus knowledge is variable between Cylons of the same model line. However, memories are stored upon download and "can be accessed by a curious Cylon who knows how".[1] Hence, the memories of Sharon Agathon were stored when she downloaded to rescue her daughter, and another Number Eight was later able to access them (TRS: "The Hub").

A download usually occurs a short amount of time after death; however, if a great number of Cylons are killed at once, it can take much longer to resurrect them all. After Caprica Six killed D'Anna Biers, she said that due to the amount of Cylons killed by a bombing, it would take at least 36 hours to even get to Biers. This also indicates that Cylons are resurrected in the order that they are killed, in that it was implied that she was going to be the last to be resurrected.

Downloading also apparently has something to do with the datastream, as when Ellen Tigh is killed and downloaded into a new body, her memories are shown flowing in a datastream (TRS: "No Exit").

The semi-sentient personalities of Raiders also can be retrieved. This allows the Raiders to return to fight with greater tactical awareness (TRS: "Scar").

The Raider known as "Scar" may have been one such Raider to learn master fighting tactics. The Scar personality scores many Colonial kills before its permanent destruction.

The Development of Resurrection Technology

Resurrection was originally invented on Kobol for humanoid Cylons some three thousand years ago (TRS: "No Exit").

After the departure from Kobol of these humanoid Cylons, the Cylons of Kobol, later known as the Thirteenth Tribe, eventually settled on Earth. During the next thousand years on Earth the humanoid Cylons gained the ability to procreate in the same manner as humans, complete with childhood.

As a result, resurrection technology was no longer necessary to preserve their species, and the knowledge of it was lost to time. Approximately 2,000 years ago, five Earth Cylons - Saul Tigh, Tory Foster, Samuel Anders, Galen Tyrol and Ellen Tigh - who (like all Cylons by that time) were born naturally, attempted to reinvent resurrection technology, formally known as "organic memory transfer".

A Messenger appeared to each the five, warning them of an impending holocaust on Earth. The humanoid Cylons had oppressed their version of Centurions and destruction was probable. Before the holocaust, the five, all researchers in the same research facility, worked around the clock to recreate the technology that was lost. According to Sam Anders' recount, the work of Galen Tyrol and Ellen Tigh was exceptional, with Mrs. Tigh making the "intuitive leap" to get the system back online. When the war came all five were killed, but they were resurrected on a ship they had prearranged near Earth.

Seeing the utter destruction of Earth and knowing the cause they were determined for it not to happen again. They knew that the humans would keep trying to create "artificial life" as well so they headed in their ship for the twelve human Colonies that were settled 1,000 years before to warn them not to make the same mistake they did and to be kind to their creations. However, they only had a ship without FTL--on Earth, the technology was not yet invented. As a result, travel to the Twelve Colonies was relativistic: on board the ship, travel time was only a few years, but the voyage was actually 2,000 years.

Near the end of their journey, they somehow made contact with the avatar of the late Zoe Graystone who, with her parents Drs. Daniel and Amanda Graystone, was developing the technology to give Zoe a new human body. The Final Five's assistance sped the Graystones's work,[2] and Zoe-A was resurrected in a tank in her father's home basement laboratory on Caprica.[3]

After what the Final Five would have perceived as nearly an instant -- but what the colonies perceived as a few years of peace, the rebellion of the Cylon slave population, and more than twelve years of human-Cylon war -- the Five finally arrived too late to deliver their prophesy and avert the carnage.

Cavil's deception of the Final Five and the destruction of Resurrection

The Five downloaded at least once more after their initial download during the nuclear holocaust on Earth 2,000 years before. The Final Five and the Centurions were successful in recreating humanoid Cylons and resurrection. The first was John Cavil, and he helped the Final Five create the other seven new Cylon models. However, Cavil held a deep grudge against humanity for enslaving his Centurion ancestors. To demonstrate the many faults of mankind, Cavil murdered the Final Five, boxed them, and ultimately unboxed them but downloaded them with their real memories blocked and false memories in their places. Cavil then proceeded to instigate the attack on the Colonies. He apparently expected them to die in the attack. Previously it was revealed that before the Resurrection Hub was destroyed, a Cylon could download as long as they were within range. This also applied to the Final Five. Cavil kept at least one fresh body for each of them, as was proven when Saul Tigh killed Ellen Tigh and she downloaded into a new body. Apparently Cavil planned for them to rejoin the Cylons when they were killed in the attack on the Colonies he apparently instigated and hoped that they'd admit that they made a mistake in supporting humanity and see, in Cavil's view, the bestial nature of mankind and join him in their destruction.

Shortly after the start of the Cylon Civil War, Resurrection for all Cylons again ended with the destruction of the Resurrection Hub. A joint attack on the Cylons' Resurrection Hub, which controls all Resurrection Ships, by Cylon rebels (The Leobens, Sixes and Sharons) and Colonial forces results in the Hub's destruction. As a result, the Cylons lose their ability to download, making them truly mortal for the first time in their history (TRS: "The Hub"). The original equipment that the Final Five used to replicate Resurrection Technology was still on The Colony perhaps as a precaution against Ellen Tigh revealing the location of The Colony Cavil, five months prior to the events of Islanded in a Stream of Stars and just before the start of the civil war Cavil moved it to the present location. It is essentially a planetoid sized space station constructed along the same principles the Baseships are with biological elements. This is where Boomer delivered Hera to Cavil in that episode.

When the Resurrection Hub was destroyed, and they lost of the ability to resurrect, the Cavil-allied Cylons (Cavils, Dorals and Simons) didn't know how to rebuild it as it was technology from the Final Five. Cavil tried to get Ellen Tigh to help rebuild it, but she claimed that she couldn't do it without Anders, Tyrol, Tory Foster, and her husband, as she only knew part of the system herself. Cavil scoffed at this and decided to mine Ellen's brain in an attempt to find the information, but Boomer helped her escape, apparently cutting off the Cylons' only chance at rebuilding the technology. However this "escape" proved to be another deception by John Cavil as he let Ellen Tigh go in an ersatz escape in order for Boomer to find the fleet and capture Hera Agathon, the human-Cylon mixed child which Boomer has successfully has brought back to Cavil in the present Cylon Homeworld. The specific plans he has for Hera and what she has to do with resurrection-if anything-is not known as of Islanded in a Stream of Stars. Options include Cavil, having forgone Resurrection, has taken Hera to determine how she was conceived by Cylon-human natural procreation as a key to Cylon-Cylon breeding and has abandoned Resurrection all together.

During the Battle of The Colony, Saul Tigh offers to give back Resurrection if Cavil lets Hera (who he's holding hostage in CIC) go and stops persuing humanity. Cavil agrees and calls off his forces. The Five combine together to recreate the plans for Resurrection and transmit them to The Colony as each holds a piece of the puzzle. With the Five giving back Resurrection and the deal made with Cavil, it looks like resurrection's return will finally end the war with peace between the sides, but Tyrol breaks the download to kill Tory after learning of her killing his wife. The download was incomplete and hostilities resume as the Cylons think they've been betrayed and the battle ends with the destruction of The Colony and all of Cavil's forces. With Tory's death at the hands of Tyrol, and Anders' death when he pilots Galactica and the rest of the Fleet into the Sun, destroying the ships, it is likely that the Ones, Fours and Fives succumbed to old age before they were able to recover the technology if any survived the destruction of The Colony by Galactica.