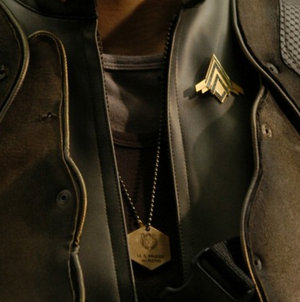 These identification tags bear the name and serial number of the servicemember.

In the event of a servicemember's death, the tags on his or her body aid in identification, particularly if the remains are difficult or impossible to identify otherwise. The tags are taken from the body if recovery is not immediate or likely, as Chief Galen Tyrol does for Tarn, Socinus and Alex "Crashdown" Quartararo on Kobol (TRS: "Valley of Darkness", "Fragged").

Captain Kelly is the somber recipient of nearly 85 tags from dead Galactica crewmen trapped in the port flight pod after it was vented to space by order of Colonel Tigh to prevent a catastrophic ship explosion (TRS: "Miniseries").

When Kara Thrace leaves Samuel Anders on Caprica to return to Galactica, she gives him her tags as a promise of her return (TRS: "The Farm"), which she receives after their reunion (TRS: "Lay Down Your Burdens, Part I").