"I am an instrument of God" - Gaius Baltar.

God (sometimes referred to as The One True God or the Cylon God) is the deity worshiped by a minority of humans living in the Twelve Colonies of Kobol and by the Cylons dating back to their initial introduction into Colonial society.

God in the Colonies

Belief in and worship of a "singular, all-knowing, all-powerful" God dates back well into Colonial History with the Monotheist Church's formation on Gemenon and the development of its militant arm the Soldiers of the One at least a century before the Fall (CAP: "Unvanquished", "Retribution").

Despite their colony's liberal and generally secular culture, some Capricans in the years before the Cylon War view monotheists with suspicion, even contempt. Agent Jordan Duram - an investigator for the GDD and devout polytheist - describes worship of a single god whose judgement cannot be questioned as "absolutism" (CAP: "Pilot"). Other Capricans are open to all forms of worship, even the worship of a single god (CAP: "Retribution").

Capricans' mistrust of monotheists is tied to activities of the Soldiers of the One whose attacks in Caprica City link worship of one god with terrorism in the public's eyes (CAP: "Gravedancing", "Retribution").

Caprican STO cell leader Sister Clarice Willow believes her student Zoe Graystone is "beloved by God" and capable of speaking with angels. She believes Graystone - whose father Daniel Graystone pioneered holobands in the Twelve Worlds - has been given the "spark of life" by God in the form of gifted abilities in computer programming. ((CAP: "Pilot"), "Reins of a Waterfall").

With her boyfriend and fellow STO member Ben Stark, sixteen year-old Graystone creates a digital double of herself in the virtual world. Though the Zoe avatar is unaware of her purpose even after Graystone is killed following Ben Stark's suicide attack on the Caprica City MLMT train, she lives on in the virtual world until she is implanted into the body of a U-87 Cyber Combat Unit by Zoe's father, Daniel Graystone (CAP: "Pilot").

Existing as a virtual avatar, the first Cylon consciousness in the Twelve Worlds, and as a duplicate of the original Zoe Grasytone, Zoe-A represents what Lacy Rand describes as a "trinity" (CAP: "Rebirth"). Indeed, in her virtual form in the V-world environment New Cap City, Zoe-A exhibits superhuman abilities, able to control code and possessing virtual immortality despite the gaming environment's restrictions (CAP: "Unvanquished"). Along with another living avatar - that in the form of recently deceased Tamara Adama - Zoe-A is embraced by New Cap City as an "Avenging Angel" and in some circles as a god. Taking on this persona, Zoe-A and Tamara "clean" New Cap City, derezzing its users and ultimately re-configuring the environment into a Kobol-esque paradise (CAP: "The Dirteaters", "The Heavens Will Rise, "Here Be Dragons").

Following Zoe Graystone's death, Clarice Willow begins reverse engineering the computer program that created Zoe-A, calling it not just an avatar but a "continuation of the soul into eternity" (CAP: "Know Thy Enemy"). Pursuing her own notion of "apotheosis", Willow seeks the blessing of the Monotheist Church proper, but comes against resistance from church leadership. Conclave leader Obal Ferras questions Willow's motives, asking Clarice if she wants to serve God or be God herself. Despite her own obvious personal ambitions, Willow believes an afterlife in the virutal world is a way of bringing God to the Twelve Worlds, removing the uncertainty in faith (CAP: "Unvanquished").

Learning of a plan to demonstrate apotheosis by blowing up Atlas Arena and thousands of Capricans, Zoe-A realizes she was created to stop Willow. Appearing in virtual heaven, Zoe-A destroys the digital landscape and declares that she herself is God to a stunned Clarice Willow (CAP: "Apotheosis").

The Children of Humanity

Sometime later - having escaped prosecution for the attempted terrorist attack - Clarice Willow begins preaching the word of the One True God to Cylons in the virtual world. As they spread throughout the Twelve Colonies, Willow speaks of Cylon potential:

Less than five years after their introduction into Colonial society, the Cylons rebel against humanity. Deeply religious, the Cylons are even considered by some to appreciate life more than humanity (Blood and Chrome). Still, the Cylons are relentless in their slaughter of humanity, igniting a protracted war that ends only after the intervention of the Final Five - encouraged by the possibility that the Centurions' belief in a loving God could end the cycle of violence (TRS: "No Exit").

Following the end of the war and the disappearance of the Cylons, belief in a singular god is diminished in the Twelve Colonies. Departing for The Colony with the Final Five, however, the Cylons develop their monotheistic religion, even learning more about human religion and its "false gods" than humanity itself (TRS: "Home, Part I"). Following the development of the humanoid models, fractures in the Cylons' belief system appear; some Cylons turning away from God and religion, others becoming devout (TRS: "Lay Down Your Burdens, Part II", "No Exit").

Fifty years after their departure, the Cylons return to the Twelve Worlds in an all out attack on humanity (TRS: "Miniseries", "The Plan"). The Cylons justify or attribute much of their actions, including the genocide of humanity, as a requirement of their God - going so far as to describe their existence as God's retribution for humanity's many sins (TRS: "Miniseries").

Occupying what remains of the Colonies, the Cylons establish "farms" where biological experiments are conducted on surviving human women in an attempt at giving the humanoid models the ability to sexually reproduce. A commandment of God to "be fruitful", the Cylons struggle with reproduction, forced to utilize organic memory transfer or resurrection technology to further their race (TRS: "The Farm", "No Exit").

A handful of remaining Colonial vessels form a fleet led by the battlestar Galactica and evades the Cylons for four years. Immediately upon the fleet's departure from the Colonies, miraculous events and the appearance of "angels" begin affecting many key surviving Colonials. An entity in the form of the sixth Cylon model, representing herself as an "angel of God" appears only to Doctor Gauis Baltar. This angel - seemingly sympathetic to the Cylons - urges and facilitates Baltar's conversion from atheist to believer in what Baltar derisively refers to as the "Cylon God" (TRS: Miniseries, "33", "Hand of God", et al).

"Head Six" demonstrates abilities and knowledge that belie rational explanation as she guides Gaius Baltar toward salvation. Following his conversion, Baltar spreads Cylon Religion to members of a cult which has arisen within the Fleet. At the behest of Head Six, Baltar tells his followers that there is something other than the Lords of Kobol in the universe that loves them, saying that they too can see this "singular spark that dwells in the soul of every living being" by looking deeply into themselves (TRS: "Escape Velocity").

Elsewhere in the fleet, President Laura Roslin, former Cylon agent Sharon Agathon and Caprica Six all begin receiving visions of an Opera House. Having himself visited the Opera House in a vision on Kobol, Baltar later recognizes the intervention of God during Battle of the Colony. Speaking directly to Cavil - a leader in the Cylons' pursuit of humanity - of his and everyone else's encounter with the miraculous, Baltar states that no one can deny that something - whether it be Gods or simply God - has guided the destinies of humanity and the Cylons (TRS: "Daybreak, Part II").

Cylon databases report of a prototype Hybrid which was the result of early experiments in evolution to biological beings. This experiment was considered a failure but believed by some to still be alive. When Kendra Shaw meets this hybrid, he declares that "my children believe I am a god" and he makes a number of statements demonstrating significant and prophetic knowledge. He refers to Kendra as "my child." (TRS: "Razor").

Gaius Baltar, initially sceptical of all religion, is converted to the Cylon faith though the persuasion of his Messenger Six and comes to conclude that he is an agent of God (TRS: "The Hand of God"). Despite this Baltar is far from a model believer and his path of faith is very rocky.

Upon orders from Messenger Six, Baltar instructs his cult, who appear to regard him as a prophet, to follow the "one true God", though it does not seem likely he has explained that this is also the Cylon God. 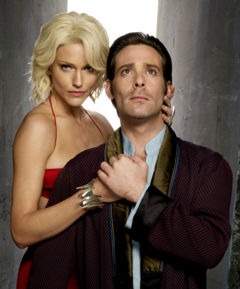 Baltar and his Angel.

The "I am" statement in "The Hand of God" is noteworthy because of the self-description that the Judeo-Christian God gives to Moses in the Book of Exodus, "I am that I am". The Christian messiah, Jesus, has a series of "I am" statements in the New Testament of the Bible. The Bible contains over 300 "I am" statements. The Hebrew name for God, Yahweh, is derived from the Hebrew word for "I am" or "to be".

The five priests of the Temple of Five worshiped a "god whose name must not be spoken." In Jewish tradition, the name of God (Yahweh) is not spoken. In a deleted scene (TRS: "Kobol's Last Gleaming, Part I"), Elosha states that the exodus from Kobol was precipitated when "one jealous god began to desire that he be elevated above all the other gods, and the war on Kobol began." The 1st commandment requires the faithful have no other god before Yahweh.

A number of elements from the show derive from Mormonism, the religion of series creator Glen Larson. In particular, the concept of a lost Thirteenth Tribe is from Mormon legend. The Quorum of Twelve is also a Mormon concept.

The name of Pergamus Flats (a location on New Caprica) is similar to Pergamus, a city mentioned in Revelation 2:12.

Q: " In “Galactica 1980,” we actually meet the “Imperious Commander” of the Cylons who turns out to be the Devil in the guise of a humanoid. Will we ever meet the maker of the Cylons in this version?

A: I think if we ever found an answer to why the Cylons have a god or who the god is--you know, the guy steps out from behind the curtain--I think you’d be disappointed. They’re in an interesting place in that their faith is as legitimate as the human faith. Human beings have souls given by the gods, and Cylons have a soul given by their one true god and that has to be just as valid. That means there is a plan for their soul and something for them after they die too. It’s a fundamental element of their faith. "