A Colonial team, in Earth's past, must work fast to stop a rogue council member from altering Earth's history in Nazi Germany. 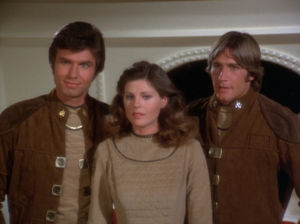 Troy Jamie and Dillon aboard Galactica

Dillon: Primitives. All alike. What are you going to do with them?

Dillon: "A beverage made from a bean. Usually served hot." (looks at Troy) Troy, they drink beans!