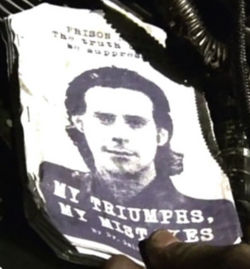 My Triumphs, My Mistakes. A worn copy of Baltar's book on the hangar deck (TRS: "Dirty Hands")

My Triumphs, My Mistakes is a manifesto written by Gaius Baltar while imprisoned on Galactica. In it he tells his life story and writes about the oppression of the working class of the Twelve Colonies by the "aristocracy," particularly the "Caprican elite." The current pages of the book that are in circulation were smuggled out of Baltar's cell and distributed amongst the Fleet by Baltar's lawyer, Alan Hughes ("Dirty Hands", "The Son Also Rises"). However, the book is not finished seeing as Baltar had to turn in several new pages after being searched by Galactica's guards on the orders of President Roslin.

Throughout the Fleet it is known as "the book." A copy is freely circulating on Galactica's flight deck. It fuels the already present dissatisfaction of the Fleet's workers, which ultimately leads to a strike among the crew of Hitei Kan and the deckhands on Galactica.

President Laura Roslin initially attempts to suppress the book, but later uses it to aid in the labor squabbles in the Fleet (Dirty Hands).

Galen Tyrol finds a copy and turns to one section:

I wash my hands of the phony democratic system; I will never let myself be distracted by the placatory crumbs that the Caprican elite led by the Roslin administration toss into the barnyard every now and again. Many of the oppressed have realized the truth and are ready to take action, even ready to take arms ... (Dirty Hands)

Other quotes from the book:

To listen requires a voice. For what needs to be known requires us to ask. (The Son Also Rises)

Baltar tells Tyrol that in the book's conclusion he asks the reader if they think the Fleet will ever be commanded by someone whose name is not Adama (Dirty Hands).

After the death of Hughes, Baltar is continuing to add to the book, hastily scribbling additions to the book in a notepad provided by Baltar's second lawyer, Romo Lampkin. Of note, he contemplates adding the following:

The nature of modern life is obsession. (The Son Also Rises)

The book is also widely read by the Cult of Baltar, who have a copy of it on their shrine in their commune (He That Believeth in Me).