Lieutenant Brendan "Hot Dog" Costanza is a Viper pilot on Galactica, and is the only known survivor among the initial batch of Viper pilots recruited from the Fleet's civilians. He initially acts more experienced than he really is, but grows to become one of Galactica's seasoned veteran pilots.

A washout from the Fleet Academy before the Second Cylon War, Costanza is picked as one of the first Viper pilot trainees recruited from the Fleet after an accident kills 13 pilots. Despite flight instructor Kara Thrace initially failing the entire class, Costanza and the others are reinstated on Commander Adama's orders and resume flight training. 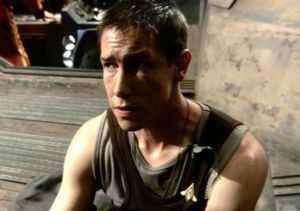 Costanza after his reckless attempt to save Lieutenant Thrace.

Costanza demonstrates loyalty, bravery and a degree of recklessness when a group of eight Cylon Raiders encounter Thrace and her nuggets on a training flight. Defying Thrace's order to return to Galactica at full throttle, Costanza turns around and joins the fight as Thrace's wingman, destroying one Raider before sustaining battle damage to his Viper. This almost gets the young, inexperienced pilot killed and complicates things for Thrace by having to cover a disabled bird, but it improves her odds against the remaining Raiders (TRS: "Act of Contrition").

Costanza ejects from his severely damaged Viper and is subsequently rescued by a Raptor piloted by Sharon Valerii and Crashdown, after which he vomits on the Raptor's deck. A short time later, after briefing Commander Adama, Costanza is led to sickbay, but not before Captain Lee Adama removes the flight wings from his own uniform and pins them on Costanza in recognition of bravery in his first combat engagement (TRS: "You Can't Go Home Again").

Costanza takes part in the attack on a Cylon tylium refinery as part of Strike Force One. It appears he assumes command of the group with the death of their flight leader, Fireball (TRS: "The Hand of God").

He helps defending Galactica while the battlestar performs lengthy calculations to locate the Fleet (TRS: "Scattered"). After returning to Galactica, Costanza survives a brief run in with a Cylon Centurion that boards the ship. With shipboard systems unreliable, Apollo orders Costanza to personally report the situation to CIC (TRS: "Valley of Darkness").

Costanza is one of the pilots, along with Captain Adama and Thrace, who are scrambled to intercept two Cylon raiders on a presumed reconnaissance mission to find Galactica. The Raiders are dispatched with ease, though their real mission was to relay a transmission from a Cylon agent on board Galactica to Caprica (TRS: "Final Cut").

Costanza is with Captain Adama and Thrace practicing handgun marksmanship on the firing range when a Cylon computer virus nearly suffocates the trio. Later, Costanza is scrambled with the rest of Galactica's air group to face a massive formation of Cylon forces. With the timely intervention of Caprica-Sharon, the enemy fighters are disabled and Costanza joyfully takes part in the Great Cylon Turkey Shoot (TRS: "Flight of the Phoenix").

Castanza is later part of the honor guard present on the hangar deck when Admiral Helena Cain arrives on Galactica (TRS: "Pegasus").

Costanza is among the pilots assigned to patrol the asteroid field during weeks-long mining operations. He survives the mission, helps account for Reilly's belongings after the pilot is killed by Scar and is later present in the pilot's rec room when Kara Thrace toasts to the deceased pilots (TRS: "Scar").

Constanza has a brief intimate relationship with Cally Henderson prior to her marriage to Galen Tyrol, and is the biological father of her son Nicholas Tyrol (TRS: "A Disquiet Follows My Soul").

After the discovery of New Caprica, Costanza remains in the Fleet above the planet, who are later forced to leave when the Cylons arrive. Four months later, Costanza leads Blue Squadron in the attack on the New Caprica ship yard. He and his wingman, Redwing, provide cover fire for resistance members attempting to enter the facility by destroying many guard tower emplacements (TRS: "Exodus, Part II").

After the exodus from New Caprica, Costanza is the one that suggests "Athena" as a callsign for Sharon Agathon. He appears to be one of Major Adama's senior pilots (TRS: "Torn") and is a member of the boarding party sent to investigate the dying Cylon basestar found in the Lion's Head Nebula (TRS: "A Measure of Salvation").

With other pilots, he is responsible for shepherding civilian ships through a massive star cluster. In one of the outbound flights, Costanza loses the Adriatic (TRS: "The Passage").

At a mission briefing he complains about a rash in his pubic region. Captain Agathon teases him about and says that he hopes the girl was worth it, moving to the next seat (TRS: "A Day in the Life").

During an underway replenishment operation near a gas giant, Costanza is assigned to fly as Thrace's wingman during a routine CAP. It is on one of these CAPs Thraces believes to have made visual contact with a Cylon ship, though Costanza and Thrace's gun camera see nothing (TRS: "Maelstrom").

Two weeks after Kara Thrace's death, Costanza is present during the daily mission brief conducted by Major Adama immediately prior to the major being taken off flight status and replaced with Karl Agathon as CAG (TRS: "The Son Also Rises").

During the opening days of Baltar's trial, Costanza is playing a game of Pyramid in Joe's bar with the nuggets Diana Seelix and Samuel Anders (TRS: "Crossroads, Part I").

After the Battle of the Ionian Nebula, he plays a "strip poker" variant of Triad with Margaret Edmonson and the tattooed pilot, before Lee Adama's send off party (TRS: "Six of One"). Costanza then joins the crew of the Demetrius as a pilot for one of her Viper Mark II fighters (TRS: "The Road Less Traveled").

When half of Galactica's air wing is assigned to the rebel Cylon basestar, Costanza is among their number. He presumably takes part in the attack on the Cylon Resurrection Hub and is later among those held hostage by Number Three ("Sine Qua Non", "The Hub", "Revelations").

Constanza and Galen Tyrol learn that the former is the biological father of Nicholas Tyrol (TRS: "A Disquiet Follows My Soul").

During Felix Gaeta's coup d'etat attempt Costanza is completely unaware of the mutiny and is deployed on the first CAP squadron fielded by the newly minted "Commander" Gaeta. He is forced to make a critical decision when he is ordered by CIC to shoot down a Raptor fleeting Galactica bound for the Rebel Baseship. When he learns President Roslin is aboard the Raptor he refuses to open fire on it, yet makes no apparent attempt to stop Narcho when he moves in to shoot it down (TRS: "Blood on the Scales"). Narcho misses the Raptor and it reaches the basestar safely. As he did not play an active part in the mutiny, he was not punished for his actions and allowed to remain on active duty.

Costanza is among the pilots present on the flight deck when Sharon Valerii returns to Galactica with Ellen Tigh. Upon seeing the resurrected Mrs. Tigh, Costanza quips, with Kara Thrace standing beside him, "how many other dead chicks are out there?" (TRS: "Deadlock").

During the evacuation of Galactica, Costanza and his son are seen toting pictures of the deceased pilots from the Wall, not wanting to leave them behind. He says that there are still people left there that no one remembers. Adama gives him leave, and he goes with his son. He volunteers to go on the mission to The Colony to rescue Hera. (TRS: "Daybreak, Part I")

In Galatica's final action against The Colony, Costanza leads the remaining Vipers into combat against overwhelming numbers of Cylon raiders. Surviving the dogfight, he calls into the CIC to tell Adama that the Cylons have backed down at the request of Cavil. Costanza presumably settles on the planet the Colonials decide to name "Earth" with the rest of the human race. (TRS: "Daybreak, Part II").

Eick: This young actress playing Kat has proven to be--and there's Bodie Olmos, Eddie's son, in the center there who's Hot Dog, he's also become a recurring character.
RDM: Well those three in the front, Chuckles, Hot Dog, and Kat, they all became "pilots" to us. And I don't think we really had any expectation of that. The idea was we were going to do "the nuggets", "the new pilots", was just going to be its own kind of story, and maybe you might see one of these guys again later. And what started happening is the writers just started putting them in, like almost every scene that we dealt with the pilots (of Galactica) so these became our "recognizable faces".