War of the Gods, Part I

As Viper pilots go missing, Apollo, Starbuck and Sheba come across a lone, enigmatic survivor. Much to their amazement, he claims that he can help them in their quest. 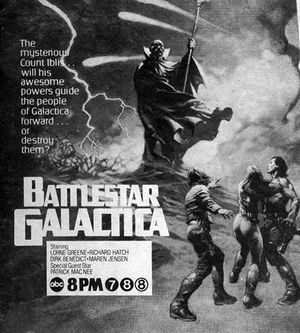 TV Guide ad for War of the Gods. 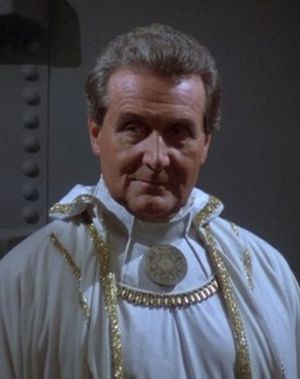 Word of the mysterious stranger has swept through the fleet. His promises are giving our people their first real hope. And yet his presence, his unwillingness to submit to routine medical procedures, leaves me with grave doubts about his integrity or his ability to fulfill his bold promises. However, another major disappointment in the lives of our beleaguered survivors might spell the end of our journey or my ability to maintain order. The possibility of hope must be sustained.

Though our pilots have been missing for a secton, spirits throughout the fleet remain inordinately high due to the presence of Count Iblis and his nightly feats of magic and promise. Is he our deliverer? Or... I don't know which way to turn.

This is an event unlike any we've experienced since the destruction of our civilization. Baltar's ship has reached our quadrant and is being intercepted by an elite squadron which will escort the treasonous instrument of our holocaust directly into our hands. Words is spreading like sunbursts through every corner of the fleet. It is a jubilation unprecedented as Baltar is brought before the Council of Twelve. It is just as Count Iblis promised. Our enemy has been delivered.

Apollo: She thinks I'm insensitive.
Starbuck: You? If she thinks you're insensitive, where does that leave me?

Iblis: You're searching for a place called Earth.
Adama: My son told you that.
Iblis: You are of the House of Kobol. Your tribes are scattered. The Thirteenth journeyed to Earth several millennia ago.
Adama: Tell me about their civilization.
Iblis: It has known great rises and falls.
Adama: Who are you? Where are you from? (a pause, then:) Is their civilization strong enough to help us defeat the Cylons?
Iblis: Your people will be safe... under my leadership.
Adama: Did I hear you correctly? Did you say under your leadership?
Iblis: Of course, Adama. Why do you think I'm here? I've come to prepare your way to Earth.