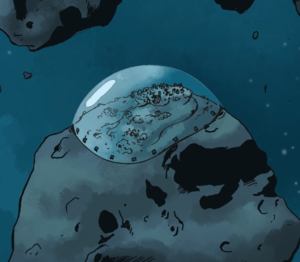 The domed habitat of Cygnus.

Cygnus is an asteroid rich in tylium, a provincial outpost of Picon.

Baltar's father, Sela, operates the tylium mine on this asteroid. When invaded by the Cylons during the course of the Thousand-Yahren War, the Capricans influence the Quorum of Twelve to abstain from defending the outpost for fear of further Cylon reprisals closer to the Colonies.

Baltar betrays both his father and the Cygnus rebels' attempt to destroy the mine to the Cylon Commandant, resulting in their execution and securing Baltar's release via a shuttle to Picon.

Following Cygnus' recovery by the Colonials yahrens later, Baltar returns to Cygnus to inherit the remains of the family business and, with the help of Abel, reactivates the Cygnus operation. Cygnus becomes Baltar's home base from which Baltar rapidly expands his tylium operations throughout the quadrant.

Both Cygnus and Picon are to be spared by the Cylons in return for Baltar's assistance with their false peace offer. The Cylons renege on this, occupying Cygnus and destroying Picon during the Battle of Cimtar (Battlestar Galactica Annual 2014).