Lost Planet of the Gods, Part I

(Redirected from Lost Planet of the Gods, Part I (TOS))
Share 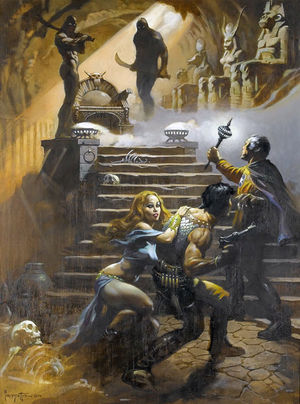 In Pharoas Tomb - concept art for Lost Planet of the Gods by Frank Frazetta. 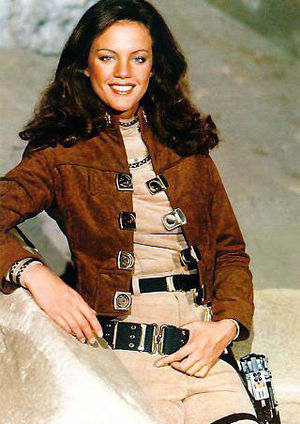 Athena in a warrior uniform.

Imperious Leader: I have examined your epistle suggesting you would be able to locate the humans.
Baltar: Why, yeah. (looks around) Oh, yes. I think... as they do! I– I– I– I know where they... will go, what they must do.
Imperious Leader: I find your reasoning logical.
Baltar: Then... then I am to be...?
Imperious Leader: Spared.
Baltar: (rises, proclaiming) To serve the Empire!

Adama: I am an expert in the art of culinary graces, and you are a find, Serina. You're a genuine find. And if I were a hundred yahrens younger... But some man will fall into the lap of early glory.

Starbuck: ...and you owe me a fumarello.

Baltar: Speak.
Lucifer: I bring good news. We believe that we have located the battlestar Galactica.
Baltar: Oh?
Lucifer: A scouting expedition of Colonial Vipers landed on our listening post in the quadrant Otarsis. They were permitted to escape, as you instructed.
Baltar: How far is this outpost from us?
Lucifer: 1.5 hectares. Since Galactica is kept to a minimum speed by the slower vehicles under her protection, at lightspeed we can easily catch her within a centon.
Baltar: Is she aware that she's been detected?
Lucifer: No. Our fighters take her by complete surprise.
Baltar: As they did at Carillon? Hmmm? One basestar is not sufficient to ensure victory over Galactica. Find her, but follow just beyond her scanner range.
Lucifer: Until we can call for reinforcements?
Baltar: Such a call would surely be picked up by Galactica. She would be alerted and escape.
Lucifer: Logical.
Baltar: Yes. Now perhaps you see why the Imperious Leader put me in command.
Lucifer: But if we cannot call for assistance, and you will not attack, is not the end result the same? The Galactica escapes.
Baltar: (laughing) Have faith, Lucifer. Have faith. I have a plan. All I need is the opportunity to present it. That will come.
Lucifer: By your command.

Serina: Your own sister's a pilot and a warrior.
Apollo: She's my sister, not my wife to be.

Starbuck: Remember, these controls are as sensitive as a school girl's... lips.

Lucifer: Isn't he wonderfully devious? We can learn much from him.