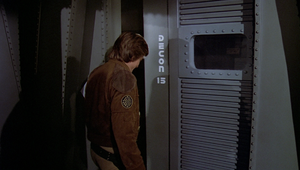 The decontamination room (or decon room) is a small, usually one-person chamber used to filter out harmful viruses and bacteria upon a person's arrival on a ship.

There are a minimum of 15 decon rooms on Galactica, at least two of which are situated on the flight deck, directly adjacent to the launch bay.

Every pilot must enter a chamber before returning to the general crew population. Upon pressing the door control, the large airlock is opened and the pilot may step in. The door then closes, forming an air tight seal. When the decontamination process is active, a red, pulsing light can be seen through the small viewing window.

On one occasion, pilots Boomer and Jolly skipped the decon procedure, causing almost the entire Blue Squadron to be infected with a potentially deadly virus (TOS: "Lost Planet of the Gods, Part I").

On being told that Jolly skipped decon for a party:

Dr. Salik: "That's just splendid. Don't these warriors realize what one errant virus or bacteria for which we have no immunity, could do to our people?"