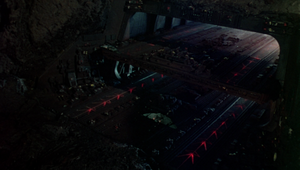 Cylon Raiders launch from their listening post on an Otarsis Quadrant asteroid (TOS: "Lost Planet of the Gods, Part I").

A Cylon listening post, also known as pods by the Colonials, is a covert installation built on a planet and designed to blend in with the surrounding landscape while gathering intelligence on enemy movements.

One such outpost is discovered by Galactica pilots Boomer and Jolly on an asteroid in the Otarsis Quadrant. Constructed on the rocky face of a canyon, the only outward sign of the station is a comparatively small launchbay hatch. This hatch can be opened by tilting the entire section by 90 degrees, allowing access for Raiders, equipment and personnel. Up until its destruction by Colonial forces, Baltar is using the base to track the movements of Galactica and the Fleet (TOS: "Lost Planet of the Gods, Part I").