Sam Adama's attempts to aid anti-government rebels on Tauron create new conflicts on Caprica. Amanda Graystone tries to get closer to the Willow family. Daniel Graystone struggles to create a realistic avatar of his wife. Joseph Adama and Evelyn build their relationship. 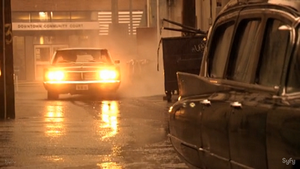 Atreus and his thugs hold up Sam Adama in front of Downtown Community Court?

Baxter Sarno: So I tried to play this holoband game, New Cap City. I held up a liquor store and I rolled a guy in an alley. If I do it three more times, I'll have enough money to actually buy the game and play it.

Guatrau: Then may I suggest that you re-shoot it. And this time use the actual Dr. Graystone. After all, there's no substitute for the real thing.

U-87: Task completed by your command.
Sam Adama: How are you with tanks?

Daniel: It's like every decision I've made since the bombing has been a wrong turn. By now, I've made so many of them I'm not sure I even know how to get back.
Joseph: Get back to where?
Daniel: To who I was, or who I thought I was.
Joseph: You can't do that alone. You may need somebody. You need someone who can see the man you were inside the man you've become and forgive you.
Daniel: Did your wife do that for you?
Joseph: Yeah. Till your daughter blew her up.