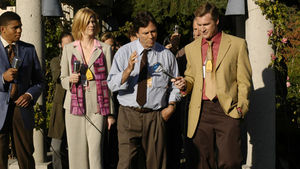 The Fleet News Service is the official name of the makeshift news service created by the handful of media reporters still alive in the Fleet.

The news service is comprised primarily of the large group of journalists that traveled aboard Colonial Heavy 798 for Galactica's decommissioning ceremony (TRS: "Miniseries").

The news service attends press conferences held by President Laura Roslin aboard Colonial One or with Commander William Adama and his command staff aboard Galactica in the pilots' ready room. While President Roslin tends to utilize them to her benefit at times and has a good relationship with the press corps ("Kobol's Last Gleaming, Part II", "Home, Part I"), neither Commander Adama, nor Colonel Tigh are particularly good at managing the deep and candid questions that the press throws at them (TRS: "Home, Part I").

D'Anna Biers is a reporter for the Fleet News Service, and creates a documentary sanctioned by the Fleet's leadership (TRS: "Final Cut").

The News-Review is a print publication, that collects current news (TRS: "Lay Down Your Burdens, Part II"). Journalists and politicians in the Fleet also use a wire service called the Colonial Dispatch (TRS: "Lay Down Your Burdens, Part I"). Other publications, most of which contain speculation about the nature of the Cylons and their presence in the Fleet, can be seen in Sesha Abinell's quarters (TRS: "Sacrifice").