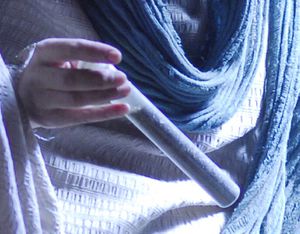 Chamalla [kə.ˈmɑ.lə] is a potent pharmacological substance with hallucinogenic properties, or the Colonial plant, root or vegetable from which it is extracted. It is used by oracles for religious purposes, and by Colonial medicine as an alternative therapy for certain illnesses, including cancer.

The benefits of the extract are viewed as questionable by those in the medical profession, as evidenced by Doctor Cottle's reaction to Roslin's request to use it when he confirms her cancer is inoperable.

Chamalla has hallucinogenic effects, desirable in its role as an entheogen, but not in its medicinal applications. In Roslin's case, these have been remarkably prescient (TRS: "Flesh and Bone", "The Hand of God", "Kobol's Last Gleaming, Part I").

The chamalla treatments, as expected by Dr. Cottle, do nothing to stop Roslin's cancer from reaching a life-threatening stage (TRS: "Epiphanies").

Chamalla has a very bitter taste. One oracle, Dodona Selloi, prefers to ingest it with candy to sweeten it (TRS: "Exodus, Part I"). When Roslin resumes to take chamalla after her cancer returns, she dissolves it in tea to mask its taste (TRS: "Crossroads, Part I").