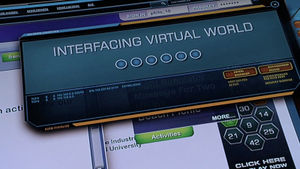 The virtual world (or V-world) is a realm accessible to holoband users in the Twelve Colonies prior to the First Cylon War. V-world allows access to a wide variety of landscapes, games, and activities - all digitally created constructs. 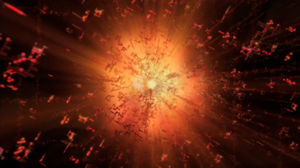 The datastream comprising the structure of the Virtual world.

In the years before the Fall, "holobanding" is a popular pastime on the Twelve Worlds. Developed by Graystone Industries of Caprica, holobands are the conduit through which users gain access to the virtual world - a digital construct where users' avatars are able to access a myriad of licensed material. The pornography sites were the first to license holoband technology on its inception, creating virtual scenarios and locations where sexual activities can take place, free of real world concerns such as disease, pregnancy or even fatigue (CAP: "Pilot", "The Imperfections of Memory").

According to Serge's Twitter account, each colony has its own V-world, hence holo cafes allow users to interact with these difference V-worlds - planetary interaction.

Out of the technology, underground sites quickly arose, in which users hacked the holoband code to create meeting places and games such as the "V-Club" and New Cap City. Users caught accessing hacked sites are subject to criminal fines under Caprican law of up to 352 cubits (CAP: "Pilot", "Gravedancing", "There is Another Sky", "Know Thy Enemy").

The virtual world - primarily its pornographic and illegally hacked sites - are attributed to the moral decline in Colonies by television pundits like Baxter Sarno. Groups, such as the monotheist terror organization Soldiers of the One also object to the virtual world, targeting holo cafes in Caprica City (CAP: "Gravedancing", "Know Thy Enemy", "False Labor"). 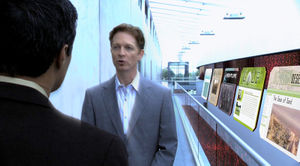 Initial access to the virtual world from Graystone Industries' holobands includes a welcome scenario in which holoband inventor Daniel Graystone introduces the new user to the menu system. This scenario takes place in "Virtual Graystone Industries", a digital recreation of the company's Caprica City campus. Though the likeness to Graystone is generally convincing, the real Graystone claims it's "not even well rendered" and fears it will frighten small children (CAP: "Know Thy Enemy", "False Labor").

The Virtual Graystone Industries bears a strong resemblance to the interior hallways of the Cylon baseship seen in Battlestar Galactica, with datastream graphics appearing in a stripe along one wall. 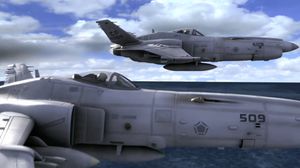 V-Match, an online social networking and dating site, provides access to virtual activities and dates for holobanders, along with traditional personal profiles. Among those accessible from the V-Match site are a V-Club Pass, Dinner Cruise, Flight Simulator, Message for Two, Hiking, Beach Picnic and more... (CAP: "The Imperfections of Memory").

It's not clear how V-Match, a seemingly legitimate social networking site, allows Philomon and "Rachel" to access the V-Club from its website as the pilot episode of Caprica establishes it as an illegal hacked site.

The virtual Flight Simulator allows users the opportunity fly real world-accurate atmospheric Viper jets. Though piloting skills are required for the simulation, users can simply tweak their avatar's skill sets in order to become Viper pilots. Still, the simulation - set over oil rigs in a Caprican sea - even depict accidents and crashes, though with no fatalities (CAP: "The Imperfections of Memory"). 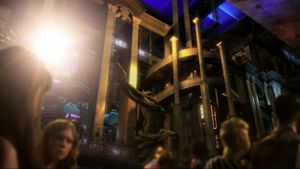 The V-Club is a hacked night club in the virtual world, in which young people gather to indulge in various questionable activities. The club is a "no limits" environment featuring drug dens, group sex rooms and the "kill zone" - an area in which visitors can fight others in hand-to-hand combat or with firearms. There is also a ritualistic sacrificing of a virgin on stage, an offering to the goddess of the underworld, Hecate (CAP: "Pilot").

The V-Club was shot at the Orpheum theatre in Vancouver, British Columbia for the pilot episode of Caprica. This was the same location utilized for the Opera House on Kobol. For subsequent episodes, footage from the location shoot was reused in conjunction with green screen in "Reins of a Waterfall," and a smaller private space or VIP room in "The Imperfections of Memory," "Ghosts in the Machine," and "End of Line".

Zoe Graystone and Lacy Rand initially visit the V-Club for the party atmosphere, but later come to view the V-Club as a sign of the Twelve Colonies' descent into hedonism, decadence, and ennui. Graystone goes on to create a separate chamber accessible from the V-Club, where she houses her duplicate avatar in a replica of the Monotheist Church retreat on Gemenon (CAP: "Pilot", "Rebirth", "Unvanquished").

A VIP room attached to the V-Club provides a private meeting place, which is later utilized by Rand and Zoe-A (CAP: "Ghosts in the Machine", "End of Line").

Despite its illicit nature as a hacked site, the V-Club is accessible through the V-Match dating site (CAP: "The Imperfections of Memory"). 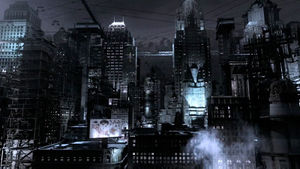 New Cap City is a virtual recreation of Caprica City, nearly identical to its real life counterpart, but featuring a darker atmosphere and violent, gangster-style game play. The game is widely known for its violence and corrupted reflection of the real life Caprica City, updated to reflect current events in the physical world including the bombing of Metropolitan Levitation Mass Transit System. Unlike the genuine article, this version of Caprica City reflects a bygone era of propeller aircraft and is patrolled by an enormous, well armed dirigible that will, at times, shoot indiscriminately at users on the streets below (CAP: "There is Another Sky", "The Imperfections of Memory").

New Cap City is ultimately destroyed by "Avenging Angels" Tamara Adama and Zoe Graystone, reconfigured into a mountainous forest as a way of rebuking the corruption and decadence displayed within the game (CAP: "The Heavens Will Rise", "Here Be Dragons").

Holoband users are also capable of building personal V-world sites in certain capacities. While Daniel Graystone frequents a virtual double of his own home for many years, STO terror cell leader Clarice Willow creates at least two versions of "heaven" in her grand plan, "Apotheosis".

Dating back as early as the initial planning of the U-87 Cyber Combat Unit, a replica of the Graystone family home exists in the virutal world. A perfect replica of the estate as well as a small perimeter around the home, this virtual house is used when Zoe Graystone first creates her own avatar double and later when Daniel Graystone attempts to perfect the avatar duplicate of his wife, Amanda Graystone (CAP: "Things We Lock Away", "False Labor", "Blowback").

The recreation is ultimately used as a permanent home for the Zoe Graystone avatar after she abandons the reconfigured New Cap City. Boasting all the amenities of the real life version, the Graystone Estate program also gives Zoe access to Daniel Graystone's personal computer system, allowing them to work in tandem in creating a new robot body for Zoe (CAP: "Here Be Dragons", "Apotheosis"). 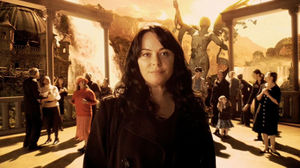 In her pursuit of creating an artificial afterlife for those martyred by the Soldiers of the One terror group, Clarice Willow and her husbands devise a virtual space where the avatars of her followers can reside following their users' physical deaths. In a demo created for the Monotheist Church, "virtual heaven" features angelic sculpture and a terrace overlooking a magnificent waterfall. It is here that believers in the "One True God" will be delivered to spend the rest of eternity, at least temporarily (CAP: "Unvanquished").

Willow and her spouses later rework virtual heaven, hoping for a less "traditional" appearance, one featuring statues of those who had created heaven, like Clarice herself. Though the reworked heaven ultimately serves its purpose and receives martyrs following the attempted bombing at Atlas Arena, virtual heaven is destroyed by a vengeful Zoe Graystone, overloading the servers on which it was created and deleting the avatars of Willow's followers (CAP: "Apotheosis").

Cathedral of the One

Following the destruction of the Apotheosis project, Clarice Willow finds a new role as Cylons become part of Colonial culture. Congregating in yet another replica of the Monad church, various models of Cylon workers (as well as U-87s) gather to hear sermons delivered by Willow. Focusing on the Cylon's rights as living beings, Willow urges the robots to revolt, speaking of a single "one" that will set them free (CAP: "Apotheosis").