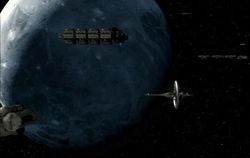 The ice moon was an astronomical body encountered briefly by the battlestar Galactica and its civilian fleet. Raptor flights dispatched by Commander William Adama to nearby star systems in an attempt to replenish water reserves discovered the unnamed moon (TRS: "Water"). It held an abundant source of water, but entirely in the form of ice, which required a large number of people to mine it. Galactica could not spare the labor, and asked for help from prisoners aboard Astral Queen. The prisoners, led by Tom Zarek, revolted against the request, but later agreed to better terms offered by Galactica and joined the mining effort (TRS: "Bastille Day").

While unconfirmed, the ice moon might be in the same star system as the Red Moon, given that the fleet was still finishing water replenishing operations when the Skirmish over the Red Moon took place.