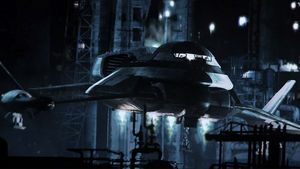 The STO's jump ship lifting off on Gemenon.

A jump ship is a type of suborbital vehicle employed by civilians in the Twelve Colonies prior to the First Cylon War.

One such jump ship is utilized by the Monotheist Church to transport new recruits from the Gemenon spaceport to the Soldiers of the One training camp (CAP: "Blowback").

As part of initiation into the STO, new recruits are subjected to a simulated hijacking of the jump ship in which polytheist rebels take control and demand they renounce the "The One True God" or face execution. Unaware that it is simply a test, Lacy Rand is the only recruit aboard her jump ship to go on the offensive, attacking one of the "hijackers" - STO training camp leader Kevin Reikle - and forcing Diego to end the simulation (CAP: "Blowback").

Part of the simulation includes actual physical contact between the jump ship and a larger aircraft (CAP: "Blowback").

The interior of the jump ship is a redress of the MLMT train set from the Caprica pilot. Distinctive bulkhead patterns identical to those seen aboard the Galactica in the Re-imagined Series are present in both the jump ship and train sets.