"Number Five", known to the humans as Aaron Doral, appears to be a man in his mid-thirties. He is initially encountered aboard Galactica, where he is operating as a public relations executive. Later he is active both within the fleeing Colonial fleet and on Caprica. He seems designed to network, almost to the point of being the sleazy used-car salesman type, but with a sadistic, violent side.

But Doral is a humanoid Cylon in reality. The Doral model's purpose is to attempt to sow the seeds of discontent or confusion, particularly during crucial life-threatening situations. Doral models endeavor to undermine authority that threatens his objectives. Doral models are more covert than the dazzling Sixes, assuming an ordinary "everyman" appearance blended in what may seem to be insignificant behind-the-scenes issues (such as converting Galactica into a museum).

Fives are among the most militant, fanatic and consistent to the Cylon objectives (only the Threes match them), whether they are dispassionately discussing the fate of humanity with his comrades or attempting to kill or maim the Colonials in a suicide bomb attack (TRS: "Litmus"). Despite this, they are held in some contempt by Cavil for "less than impressive" performance, and even relegated at times to menial tasks that they believe the Centurions should perform, such as mass burials of human casualties (TRS: "The Plan").

Doral appears to be exactly what he claims when first seen in the Miniseries: a PR executive. He coordinates the ceremony surrounding Galactica's decommissioning and transfer to the civilian authorities represented by Secretary of Education Laura Roslin. During the lead-up to the ceremony, he mocks Galactica as antiquated and advocates automated defense systems (which would be more vulnerable to Cylon interference).

In the role of PR executive, Doral is efficient, polite and able to carry out his work without ruffling the feathers of those around him, while at the same time marshaling and managing the media. He usually wears an emerald suit and tie.

When Laura Roslin, as senior government official, takes charge of Colonial Heavy 798 during the Cylon attack, Doral immediately objects to her leadership immediately after her announcement to the passengers of the nuclear attacks on the various colonies ("Wait a minute...who put you in charge?"). Later, Doral tries to convince Lee Adama to assume the leadership role from Roslin. Captain Adama witnesses and supports Roslin and her leadership decisions, which quickly puts Doral in his place.

Following Gaius Baltar's arrival on Galactica, Doral becomes the fall-guy Baltar needs to divert any suspicions he feels may otherwise be directed at him following the Cylon incursion into the Twelve Colonies. In this, he is partially steered by Number Six - although the selection of Doral as his fall-guy appears to be Baltar's own choice by educated guess.

Arrested and thrown into the brig, Doral loudly proclaims his innocence of all charges, citing his background and upbringing: that he was born in Oasis, a hamlet near Caprica City, and grew up on the south side of Caprica City itself before going to Gemenon, where he studied public relations at the Kobol Colleges.

Later, after being left at the Ragnar Anchorage space station, Doral exhibits all of the symptoms initially shown by the humanoid Cylon Leoben Conoy, confirming the fact that he is a Cylon and that, however "coincidentally," Baltar selected the "right" man.

Despite his protestations of innocence, and the palpable level of fear he demonstrates within the brig, it is unlikely (based on later characterizations of humanoid Cylons who infiltrate the Fleet) that this Doral copy is a "sleeper" Cylon. Unlike Sharon "Boomer" Valerii, this Doral knew of his true nature. He is rescued and debriefed by a group of his fellow humanoid Cylons, including another Number Five (TRS: "Miniseries"). 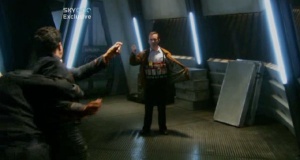 Aaron Doral in his suicide bomber role aboard Galactica.

A copy of Doral also turns up on Galactica and is advised by Brother Cavil to act as a suicide bomber ("Litmus", "The Plan"). Supplied with explosives stolen from a small-arms locker and used to create a primitive bomb, he detonates in a corridor of the ship after being spotted and challenged by William Adama.

At the time of the explosion, Starbuck suggests that Doral's intended target was Gaius Baltar. There is little direct evidence to back-up Starbuck's claim. Sergeant Hadrian's investigation into the matter establishes that the small arms locker used by Doral is located relatively close to the flight pod (where Doral would have come aboard). Therefore, the fact that the locker and Baltar's lab resided on the same deck may have been coincidental.

Doral appears to spend some time wandering through the ship before detonating his bomb, which suggests he may have been looking for a target of opportunity, such as a command staff member or sensitive area such as CIC (TRS: "Litmus").

This copy of Doral is implied to be rather unintelligent. Cavil berates him for walking around in the open wearing his trademark flashy suit and, more importantly, the face of a man left for dead. Doral takes issue with Cavil's criticism, citing that the Number Five marooned on Ragnar wore a burgundy suit, while he wears a teal suit. Cavil is stupefied by the response. Some weeks after his suicide, the prostitute Six with whom Cavil was collaborating mocked Doral's lack of intelligence and how he blew himself up in the middle of a deserted hallway in a tactically unimportant part of Galactica (TRS: "The Plan"). 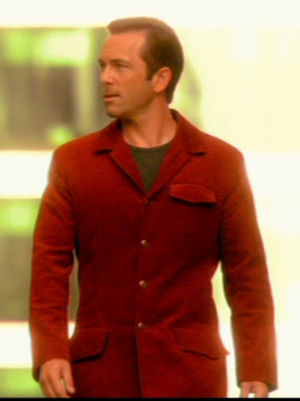 Five in his overseer role.

On Caprica, Number Five performs the role of a Cylon overseer, working with Number Six to ensure their experiment involving the stranded Karl Agathon and Caprica copy of Sharon Valerii either reaches its desired conclusion, or is suitably terminated ("Bastille Day", "Litmus", "Flesh and Bone", "Tigh Me Up, Tigh Me Down"). He wears a red suit, more utilitarian than that of his PR executive counterpart.

In this, Five shows a harder attitude towards humans than Six. When she expresses regret that the destruction of humanity was necessary in order for the Cylons to achieve their ends, he is not so forgiving:

Six: "This all makes me so sad."
Five: (matter-of-fact) "They would have destroyed themselves anyway. They deserve what they got."
Six: "We're the children of humanity. That makes them our parents in a sense."
Five: "True - but parents have to die. It's the only way children come into their own."

Later, however, when Six is disdainful of Valerii's apparent feelings for Agathon when the Caprican experiment goes awry, Five is more sympathetic, wondering what it must be like to be driven by passion that marks Agathon's action: "Even in his anguish he seemed....so alive" (TRS: "Tigh Me Up, Tigh Me Down").

In "Final Cut", a Number Five is one of the Cylons that watches D'Anna Biers's broadcast. He comments that the life of Sharon and Helo's hybrid child must be protected at all costs.

Several copies of Number Five are seen on Cylon-occupied Caprica throughout "Downloaded", the episode that reveals that he is the fifth in the sequence of twelve Cylon models. A Five is one of the four 'rebirth nurses' that welcome first Caprica-Six and (much) later Galactica-Sharon, the "Heroes of the Cylon" back to life after their respective downloads into new bodies. He tells Boomer that the Cylons are proud of her. A copy congratulates Caprica-Six for her work in taking down the Colonial defenses. Another copy is serving coffee at the cafe which is bombed by Samuel Anders's resistance group, while yet another rescues "Caprica" and Sharon from the ruins of a garage later the same day. Fives are also seen digging mass graves for human casualties on Caprica by Samuel Anders and Jean Barolay, apparently overseen by a Number One. The fact that there are so many of the same person alerts the Caprica Resistance to the existence of human Cylon models. The Resistance ambushes and kills these copies with no loss of life to themselves and "rescues" Brother Cavil.

A Five is part of the leading group during the invasion of New Caprica, along with the aforementioned "Heroes of the Cylon". Fitting his personality archetype, this Five is quite direct in his insistence that the Colonials surrender without resistance to the Cylon armada (TRS: "Lay Down Your Burdens, Part II").

The humanoid Cylon leading the force of Centurions outside the temple on New Caprica is not seen, but is identifiable as a Five by his voice. This copy or another one later interrogates Jammer, expressing regret at the massacre at the temple and claiming it to be the resistance's fault. He releases Jammer, but not before giving him a key card to the New Caprica Detention Center to report to him if he changes his mind. After hearing Tigh's plans to hide weapons in a hospital, Jammer heads off to report to this Five. (TRS: "Battlestar Galactica: The Resistance"). At least two or three Fives make up the occupation force on New Caprica: two are shown voting on matters with the rest of the Cylon leaders with one killing Caprica-Six when she dissents with them forcing Baltar to sign a death list. The murder of Caprica-Six, though she eventually downloads into a new body, causes Baltar to cooperate. D'Anna Biers later finds Doctor Sherman Cottle to ask him about Hera Agathon and he reveals that he has been operating on a Five, either one of the two shown or a different one, that was shot by insurgents. Despite the Five being a Cylon and being able to download, Cottle operated on him as he doesn't care what his patient is and was able to save his life.

A Five is found and recovered from the infected basestar by Galactica, intending to be a part of the plan to infect the entire Cylon race with a virus spawned from an ancient probe. However, just before they are within download range of a Resurrection Ship, he and the other prisoners are killed by Karl Agathon, thus killing the Cylons permanently (TRS: "A Measure of Salvation").

The Fives side with the Ones and the Fours in the decision to lobotomize the Raiders after they defied the humanoid Cylons' wishes at the Ionian Nebula. Two of them are shot in the conference room by Centurions whose telencephalic inhibitors have been removed by Natalie's faction (TRS: "Six of One").

Several Fives are present to prevent the rescue of Hera, and attack the Colonials. One sneaks up behind a couple of Marines that include Sharon Agathon and her husband, shooting and wounding him before Kara Thrace kills him. While making her way through the corridors of Galactica during the battle, Hera passes another dead copy. During the initial part of the battle after Samuel Anders deactivates the Colony's Hybrids, a Five notes that Anders must have shut down the Hybrids, showing knowledge of the identities of the Final Five's identities and Anders' condition. He joins Cavil in an assault on Galactica. The Five, a Four and Cavil assault the CIC, but the Five and the Four are killed and Cavil is captured. Another joins Cavil with another Four during the truce Baltar and Saul Tigh brokers and he stares for a moment at his dead counterpart. When Galen Tyrol starts to strangle Tory Foster for killing his wife, the Five believes that they have been betrayed and opens fire along with the other two Cylons. He is killed by Lee Adama. All Fives aboard the Colony perish when it is consumed by the black hole it is orbiting. (TRS: "Daybreak, Part II")