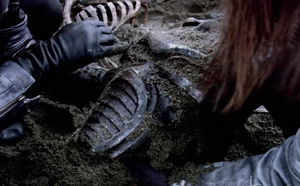 The remains of an ancient Cylon discovered on Earth.

Earth Cylon Centurions are a model of mechanical Cylon built by members of the Thirteenth Tribe living on Earth some two thousand years before the Fall of the Twelve Colonies.

Comparable in design and function to the Centurions created by Colonials prior to the Cylon War, these robots eventually rebel against their humanoid masters, instigating a nuclear war that brings the planet to ruin and annihilates both themselves and the Thirteenth Tribe.

Centuries later, crew members from the battlestar Galactica and the rebel Cylon basestar discover the remains of a number of Earth Centurions among the bones of their creators, buried in the still irradiated soil of Earth. Before the discovery, Colonials and rebel Cylons did not know that mechanical Cylons had existed so far back in history (TRS: "Sometimes a Great Notion"). 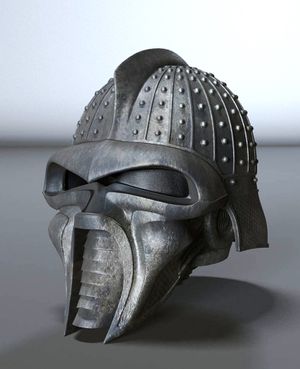 The design of Earth's Centurions was inspired by the helmet of samurai and the Centurions appearing in the Re-imagined and Original Series. In an unusual move, the Battlestar Galactica VFX department - namely Gary Hutzel and Pierre Drolet - designed and created a CG model of the Earth Centurion helmet which was then built practically by the prop department. Early designs of the Centurion were deemed too similar to Darth Vader, resulting in the shortening of the helmet before its construction.[1]