This article is about the Number Three copy introduced in "Downloaded". For articles on other copies of this model, see Number Three

A copy of Number Three introduced in "Downloaded", also known as "D'Anna", is a Cylon who pursues the truth of Hera Agathon's "death" and, later, the Final Five Cylons. The later search leads her on a "messianic quest" that sets her against the other Cylon models, notably the Number Ones, which results in both her and her entire line being boxed. She was rescued from this state but became the last copy in existence afterward.

"Heroes of the Cylon" and New Caprica

This Three is in charge of downloading humanoid Cylons, and presides over the returns of both Caprica-Six and Sharon Valerii. Like her counterpart in the movie theater, she is assisted by a Five, Six, and Eight.

She later enlists Caprica-Six to help reintegrate Sharon "Boomer" Valerii. Though her motives are outwardly altruistic, her conversation with them is filled with double meanings, trying to subtlety nudge both into exposing that they were corrupted by their close interaction with humans. Three's real goal is to assess the risk factor of these "Heroes of the Cylon" to the status quo, due to their different perspectives on the war and the genocide, and contemplates boxing Caprica Six.

Three is later trapped with both Caprica Six and "Boomer" Valerii beneath a garage after capturing resistance fighter Samuel Anders. With a hint from her internal Gaius Baltar, Six deduces the truth. Shortly thereafter, Three resolves to kill Anders in spite of her previous agreement. But Caprica-Six proves Three's assessment correct, and smashes her in the skull with debris (TRS: "Downloaded"). She is later resurrected and would become a part of the Cylon Occupation Authority on New Caprica (TRS: "Occupation" through "Exodus, Part II"), as well as the primary Number Three to lead the search for the Final Five (TRS: "Torn" through "The Eye of Jupiter").

The Search for Hera

On New Caprica, Number Three visits an oracle after having strange dreams that caused her to question her faith. These dreams, which focused on Sharon Agathon and her baby Hera, lead her to seek out more information about the death of the child. After speaking with Doctor Sherman Cottle, she becomes convinced that the child is still alive. She confronts Agathon with this information after discovering her on the planet, only to be shot once in each knee so that she can't raise the alarm with nearby Cylons (TRS: "Exodus, Part I"). 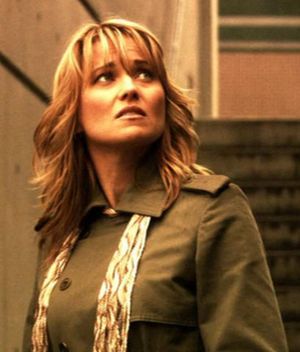 During the Battle of New Caprica, Number Three volunteers to stay behind to detonate a nuclear weapon and kill any surviving humans on the planet, and offers Gaius Baltar a place with the Cylons. Instead of activating the nuclear device right away, she looks for an oracle she had consulted earlier. While she searches, she hears the cries of Hera Agathon, who was found by Baltar and Caprica-Six after they had gone outside to stop her. Three takes Hera into her arms and abandons her plan to detonate the weapon. The four later join the Cylons on board a basestar. (TRS: "Exodus, Part II").

The Search for Earth

After leaving New Caprica, Three visits an imprisoned Baltar in his room aboard a Cylon baseship. She gives him his pills, at the same time as she acts in a seductive manner with him. Baltar however, seems to reject her, asking about what will be done to him. Three tells him that the Cylons are unsure of his vote, and that they are even split on what to do with him, with only one model missing from the vote and on whom the decisions rests, the Sixes (TRS: "Collaborators").

After returning to the main fleet, Three learns from Caprica Six that Baltar lied to them about what he saw on the infected ship. She then proceeds to torture Baltar, first through body-wide electroshocks, and then with a sonic device which damages his eardrum, hoping to learn more about the disease. Near the end of the interrogation, Baltar tells Three (calling her "D'Anna") that he loves her, which makes her stop and presumably feel something for him, for she caresses him as he falls unconscious (TRS: "A Measure of Salvation").

The Search for the Final Five

Later, she is getting out of a bed with a still sleeping Baltar and Caprica-Six, indicating that she has started a relationship with at least Baltar, and possibly Caprica-Six as well. This copy continues to experiences prophetic dreams and visions, resulting in her ordering a Centurion to kill so she may experience further visions in the time between death and rebirth. During this time, she sees a vision of five mysterious beings in the Kobol Opera House (TRS: "Hero").

She continues doing this daily, which attracts the attention of Baltar, who confronts her about it. She tells Baltar that when she dies she sees the faces of beings who she believes to be the Final Five. Later on, the two decide to go to the Hybrid, to learn more about the Final Five from it. Instead, they manage to learn the location of a planet which is said to hold the Eye of Jupiter, an artifact which is supposed to point the way to Earth (TRS: "The Passage"). 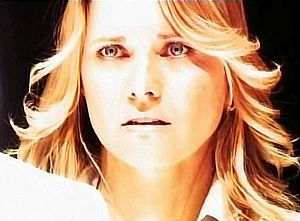 Three sees the faces of the Final Five.

Coincidentally, the Colonials arrive at this planet at the same time, which leads to a tense standoff. At its height, Three and Baltar and a Cavil depart their basestar in a Heavy Raider and head for the planet (TRS: "The Eye of Jupiter"). They enter the Temple of Five and manage to disarm explosives set by a the Colonials. When the system's star goes nova the interior of the temple is illuminated and a column of light shines down from above. Three believes that this is what she has been looking for and steps forward towards the light. 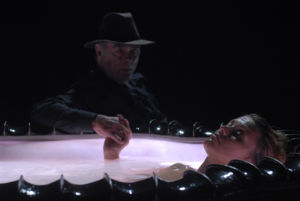 Realizing that she's only there for a selfish purpose, Cavil pulls a gun on her and threatens to shoot but he is killed by Baltar before he can. She steps into the light and finds herself in the Kobol Opera House standing before the Final Five. She approaches and sees their faces clearly for the first time, recognizing one of them in particular she says with a surprised look on her face, "You... forgive me... I had no idea." She is pulled back to the temple and collapses in Baltar's arms. She tells Baltar, "You were right," but dies in his arms before answering about what.

Some time later, Three awakens on a Resurrection Ship with a Cavil looming over her resurrection tank. He informs her that the decision has been made to box her consciousness and her entire model line as punishment for their rogue actions. She tells Cavil that she has seen the faces of the last five Cylons and that one day he will too. Cavil then removes a device from the side of the tank and she collapses dead. Simultaneously, other Cavils are performing the same act to other Number Three models in resurrection tanks around the ship (TRS: "Rapture").

This condition does not last long as she is unboxed by Cavil and Boomer in an attempt to get her to convince the rebels to stop their civil war. However, when learning that the rebels are about to destroy the Hub, making their deaths permanent, she kills this Cavil model by snapping his neck. Boomer escapes while she does this. As she gets dressed, Karl Agathon and a Number Eight run into the room and take her off the Hub before it is destroyed. She is now the only living Three, the boxed consciousnesses of the others having gone down with the Hub. On the baseship, Three is taken to see Roslin and tells her that she is one of the Final Five - then makes it clear that she was joking to see the look on Roslin's face. Knowing that Roslin plans to betray the deal with the Cylon rebels by keeping D'Anna's information from them and aware of her new mortality, she tells Roslin that she won't reveal anything until she is safe in the Fleet (TRS: "The Hub").

Number Three assumes leadership of the Cylon rebels, holding President Roslin hostage. She demands that the Cylons on Galactica come out of hiding and attempts to force the Colonials to give them up, going so far as to execute a Colonial pilot and threatening to do that every quarter hour until the Final Four (the Five sans Ellen") are with her. Tory Foster joins her immediately, but the other three are captured by the Colonials after Saul Tigh confesses to Adama. President Lee Adama threatens to airlock them to force Three to stand down, who in turns aims the basestar's nuclear arsenal at the civilian Fleet. Baltar tries to convince her to stand down and cooperate with the humans, but she refuses not believing it to be possible. The situation is defused when Kara Thrace discovers a direct clue towards Earth in her Viper. President Adama calls Three to fully share this information with her and to grant a full amnesty to the four Cylons. Number Three agrees to stand down and return the hostages to the Fleet. After jumping to Earth together with the Colonials, she joins the first landing party to Earth and is equally shocked to find it in ruins (TRS: "Revelations").

As the Colonials and their rebel Cylon allies prepare to depart Earth orbit in search of a new homeworld, Three tells Colonel Tigh that she is tired of running from the Cavils and their followers. Instead, she abandons the Cylons and Colonials, opting to die alone on post-apocalyptic Earth. She is last seen sitting on the shore. (TRS: "Sometimes a Great Notion").[1]

In Lucy Lawless' words "She's like the ultimate narcissist. She believes that she is the pure form, so she is constantly trying to bring everyone else in line with her world view."