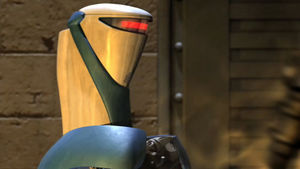 A typical robot on Caprica, before the Fall.

A robot is a mechanical being created to make life easier on the Twelve Colonies. Robots are a type of - but distinguished from - cybernetic life-forms like the later, more advanced Cylons.

Several models of robots were employed - if not designed - by Graystone Industries in Caprica City. Their ultimate creation, however, was the U-87 Cyber Combat Unit. 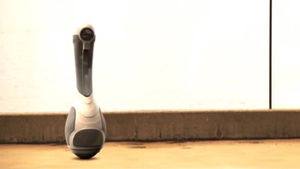 Robotic servants, like the Graystone Family's Serge, existed in colonies like Caprica in the years prior to the First Cylon War. These servant robots were non-humanoid in construction, distinguished by a rounded shape and single, circular eye. Robot servants were able to remotely control functions within the household, including operating doors and controlling televisions. They acted as butlers for their human masters, greeting guests and authorized them for entry or - if necessary - denied them entry. Speaking in friendly tones, these robot servants were capable of recognizing individuals by sight and reciting biographical and historical information. (CAP: "Pilot", "Know Thy Enemy", "The Dirteaters"). 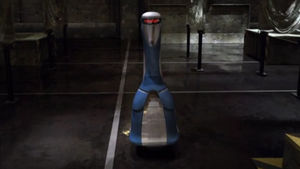 Several of this type of robot were used in independent identification, acquisition, resolution and execution of conflict evaluations for Graystone Industries' Cyber Combat Unit. While initial tests only involved one such robot, exchanging paintball fire with the U-87, later, more successful tests involved the deployment of real firearms. These test robots were outfitted with projectile weapons and were deployed in a fire fight with the robot soldier (CAP: "Pilot"). 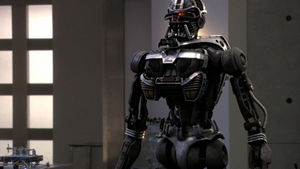 The Cyber Combat Unit was a robotic soldier built by Graystone Industries in competition with the Vergis Corporation for a long term Caprican Defense Department contract. Half-a-billion cubits over budget and five years over schedule, the robot soldier concept had initial difficulties in independent identification, acquisition, resolution and execution of conflict evaluations. This robot soldier was humanoid in design, with a single scanning "eye" colored yellow by design (CAP: "Pilot").

It was not until the installation of the stolen meta-cognitive processor, engineered by the Vergis Corporation, that the Cyber Combat Unit met expectations and earned Graystone Industries its defense contract. With the MCP active, the Cyber Combat Unit's eye would turn red and it would become capable of complex brain activity. This processor combined with data downloaded from a holographic avatar allowed Daniel Graystone to transfer the consciousness of his deceased daughter Zoe Graystone into the U-87 model of the Cyber Combat Unit. Dubbed a 'Cybernetic Life-form Node' by Graystone, this android was the first of what would become the Cylon race (CAP: "Pilot").

Following the Fall of the Twelve Colonies a combined Human/Cylon fleet arrived at Earth to discover it a barren ruin. An excavation of artifacts and fossils of the 2,000 year old wasteland uncovered the remains of several Cylon Centurions scattered throughout the planet. Although similar in design to Cylon War-era Centurions, these were not constructed by the Colonial Cylons and represented the creation of the Thirteenth Tribe, a Cylon tribe, who were descended from Cylons created on Kobol that rebelled against the humans on Kobol, and who were themselves overthrown by their robotic slaves (TRS: "Home, Part I", "Sometimes a Great Notion", "No Exit").