The Thirteenth Tribe were a race of early generation Cylons that lived on Kobol.

The Thirteenth Tribe left the twelve tribes of humans and settled on Earth some 2,000 years before the remaining tribes left Kobol to form the Twelve Colonies of Kobol (TRS: "The Eye of Jupiter")[1], some 4,000 years prior to the events of the Cylon Attack.

"...The Sacred Scrolls tell that the 13th tribe left Kobol in the early days. They traveled far and made their home upon a planet called Earth...which circled a distant and unknown star." (TRS: "Miniseries")

The twelve tribes eventually forgot that their ancestors had ever created Cylons, and the Thirteenth Tribe was mistakenly remembered as being another tribe of humans. They and Earth were also considered mythical by many on the Twelve Colonies. Because the Number Ones' reprogramming of their siblings left the other six active models unaware of their origins, the majority of Cylons also believed that the Thirteenth Tribe had been human and had no knowledge of their connection to them until the discovery of Earth (Torn, Sometimes a Great Notion).

The Thirteenth Tribe consisted of humanoid Cylons, who originated on Kobol, evolved from mechanical counterparts that the humans of Kobol had created. With them on Earth there was also a distinct model of robotic Cylon, of which only the buried helmet has been seen.

While still on Kobol, Cylons or their creators had developed resurrection technology. The Thirteenth Tribe abandoned and eventually forgot how to build or use this technology during their stay on Earth after they had started to reproduce sexually. Subsequent generations of Cylons were born, not built. The knowledge that their ancestors had used resurrection remained, however, and there was later an effort to recreate it at a scientific research facility.

Roughly two millennia prior to the Fall of the Twelve Colonies, Earth was devastated by an apocalyptic rebellion of their own Centurions that apparently destroyed both sides. At that time a group of scientists, later known as the Final Five, had worked very hard to reinvent resurrection. They had anticipated the obliteration and prepared a vessel in Earth's orbit, which they downloaded to in due time. They were the only survivors, and only survived due to resurrecting in new bodies.

The five survivors, the last of the Thirteenth Tribe, went on a long trip using sub-luminal speed in search of the Twelve Colonies to warn them of the dangers inherent in creating artificial life and not treating it well.

The Final Five allied themselves with the Colonial Centurions and went on to create eight new models of humanoid Cylon. The Thirteenth Tribe can be said to survive in the new Cylons, and in their hybrid descendants on the new Earth.

Of the Final Five, two, Tory Foster and Samuel Anders, eventually were killed permanently. Ellen Tigh, Saul Tigh, and Galen Tyrol made it to the new Earth to live out the rest of their lives.

During some period, travel appears to have taken place from Earth to Kobol, as the Sacred Scrolls give an account of the journey to Earth.

The Tomb of Athena was the first marker on a path to Earth (TRS: "Home, Part II")

Commander William Adama falsely claims to know the location of Earth, using the lie to give the battered remnants of humanity a cause and reason to hope after their escape from the devastated Colonies (TRS: "Miniseries"). Later, through the efforts of President Roslin, Adama and others locate a tomb on Kobol, which reveals a map and sufficient references to point his Fleet to the true general coordinates of the legendary Thirteenth Colony of Earth (TRS: "Home, Part II"). 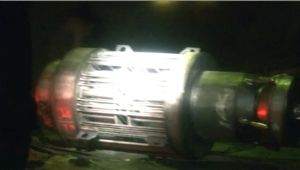 A beacon near the Lion's Head Nebula, left by the Thirteenth Tribe, but found by the Cylons (TRS: "Torn")

Over a year later, an ancient probe, possibly the first tangible evidence of the Thirteenth Tribe's existence, is recovered by the Cylons in the Lion's Head Nebula. The probe contains a virus that proves particularly deadly to the Cylons on the baseship that recover it. The Cylons fear the virus so much that they abandon the baseship, moving their Resurrection Ship away to prevent any dying Cylons from resurrecting and transferring the bioelectric component of the pathogen to the Cylon populace. The probe is later destroyed after the baseship self-destructs ("Torn", "A Measure of Salvation").

The Thirteenth Tribe apparently has used one planet as a waystation in their journey. They settled on a planet and built a Temple of Hopes to pray for a path to their new home. Later, this temple was renamed in Colonial mythology to the "Temple of Five" and described as being dedicated to five priests that worshipped "the one whose name cannot be spoken". It is uncertain when this modification took place or who did it. Over 4,000 years later, the Temple of Five is discovered by the Fleet. The refugee Colonials believe that an artifact called the Eye of Jupiter resides there, which is another marker on the path to Earth (TRS: "The Eye of Jupiter"). 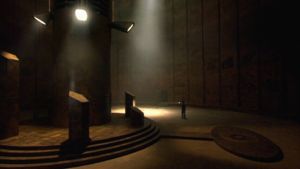 The Temple of Five, a curious marker (TRS: "Rapture")

No such artifact actually exists, however. The Eye of Jupiter is, in fact, the image created by the planet's dying sun. A strange and highly improbable sequence of events occurs when both Cylon and Colonial forces meet at this unremarkable "algae planet" to find the legendary lost temple near the moment of the star's imminent nova. After they leave the system, the Colonials discover that the nova resembles another older nova that occurred in the time of the Thirteenth Tribe's exodus, located in the Ionian system, and believe that they have found a new marker to Earth.

The Temple was apparently modified to allow an individual to see the faces of the Final Five as the star begins to nova. Ellen Tigh states that this modification was not done by the Final Five, though she confirms that the five of them did rediscover the temple on their journey from Earth.[2] A Number Three Cylon uses the device. Only Gaius Baltar witnesses this mechanism in use, but is reluctant to use it himself until it is too late, when the mechanism shuts down as the nova's light is replaced by the shadow of its shockwave (TRS: "Rapture"). 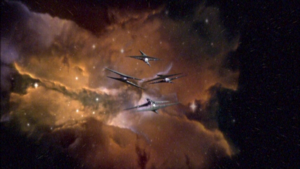 The Ionian nebula, where the turbulent events of the Season 3 finale take place.

As the Fleet approaches the Ionian nebula, four Colonials experience what they initially believe is a hallucination of fragments of music. Laura Roslin, who has resumed the use of chamalla as part of her renewed fight against her cancer, begins to experience visions of the Opera House where she, an image of Sharon Agathon and Caprica Six fight to retrieve an image of Hera Agathon running in the halls. Roslin and Agathon meet with the incarcerated Caprica Six and realize that all three are experiencing the dream.

When the Fleet arrives at the nebula, Roslin nearly faints. The four crewmembers who experience the musical hallucination are drawn to each other and now hear not only a coherent melody but lyrics as well. The four realize that they are Cylons, but choose to continue their work as Colonials. The entire Fleet loses electrical power for a time, for reasons unknown.

After a Cylon fleet also arrives at the nebula, Vipers are scrambled to meet them. One pilot, Lee "Apollo" Adama, detects and intercepts a mysterious target on DRADIS. Adding to the mystery of the Ionian nebula, Kara Thrace, a pilot believed dead, flies her Viper Mark II alongside Apollo and tells him that she has been to and can show the Fleet of the path to Earth ("Crossroads, Part II", "He That Believeth In Me").[3] 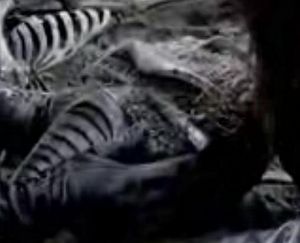 After finding Earth, the Fleet's first landing party lands on a coast, near the burned out ruins of a city which had been nuked some 2,000 years previously (TRS: "Revelations"). Excavations by Cylon teams produced skeletons and the head of a previously unknown model of Cylon Centurion. DNA analysis of the skeletons using Cylon protocols revealed that the Thirteenth Tribe was Cylon. Samuel Anders, Tory Foster, Saul Tigh, and Galen Tyrol recover fragments of memory while in the ruins, recalling that they were part of the Thirteenth Tribe and lived on Earth until the disaster hit. Tigh also remembers that his wife Ellen was here, realizing that she is the last of the Final Five (TRS: "Sometimes a Great Notion").

Survivors of the Tribe

Approximately 2,000 years before the fall of the 12 Colonies, the Life Form Nodes created by the Thirteenth Tribe rebelled, and in an act of mutually assured destruction, leveled the planet in a nuclear holocaust, in which everyone including the Centurions were destroyed. The Final Five (Saul Tigh, Ellen Tigh, Tory Foster, Galen Tyrol and Samuel Anders) managed to survive by downloading to a ship containing their rebuilt resurrection technology in orbit. They helped the Centurions they found from the Twelve Colonies build a new Cylon society, but were killed and downloaded into new bodies with false memories by Number One. The Five spent most of their "human" lives with no knowledge of who they were until months before they rediscovered Earth. Four of the five had knowledge of their true identities triggered (the fifth, Ellen, was a Cylon prisoner whose resurrection into a new body had restored her memories) but none of their memories restored except brief flashes.

When the Five's Cylon "children" destroyed the Twelve Colonies, the Five ended up having to go through another nuclear holocaust, although they survived this one without downloading. The Cavils had expected them to die, download and apologize but none died. Tyrol and Saul Tigh were on Galactica, Anders was high in the mountains doing survival training, Tory survived a blast outside Delphi, and Ellen survived a blast on Picon, but was seriously hurt. Cavil, who was with her at the time, helped rescue her as he felt she hadn't learned the lesson he wanted her to learn and didn't want her to die and download until she learned that. Both Ellen and Anders said "this has happened before" after the attacks started, parts of their past apparently emerging, and Ellen even got flashes of memory of herself on Earth with Saul before they were killed, although she apparently didn't remember this later (TRS: "The Plan").

Anders, after getting shot in the head, had his memories restored, but after a surgery to remove the bullet, went into a sort of vegetative state before later becoming Galactica's Hybrid and was unable to communicate most of what he learned. The Five were reunited and helped battle the enemy Cylon forces in a battle that resulted in the destruction of The Colony, the ship that the Five used to get from Earth which was used as the main Cylon base. Galen Tyrol kills Tory Foster during the battle for murdering his wife and Samuel Anders is later killed when he flies the Fleet into the new Earth's sun. With the deaths of Anders and Foster, there were only three remaning true survivors of the Thirteenth Tribe until they died of presumably natural causes later.