For the article covering this Cylon model in general, see Number Two. For the apparition of Conoy that Kara Thrace encounters in "Maelstrom", see Messenger Leoben.

Leoben Conoy is the human name for a humanoid Cylon named Number Two. While other copies of this model also used this name, this article discusses a specific copy: the one that Kara Thrace interrogates and is later imprisoned by.

Not long after the Fleet's first encounter with a Number Two on Ragnar Anchorage, another copy is found stowing away aboard the Gemenon Traveler. This copy was originally the Defense Minister's yoga instructor.

Cavil ordered Leoben to hack into the military's communications and also try to find a way to contact a basestar next time they're near one. It's unknown if he ever managed to find a way to contact a basestar, but he managed to hack into the military's com and became somewhat obsessed with Kara Thrace as a result of hearing her voice. After being forced on the run after two men he pass recignize him from a picture two marines are showing around of him and Doral, Leoben paints the mandala on a wall of the ship. He also starts to believe that Starbuck has a greater destiny after learning of her learning by herself how to fly the captured Cylon Raider. Leoben says she must've pulled the knowledge out of "the stream" (what he means is unclear), but the marines catch up with him and arrest him while he's distracted by his conversation with Cavil, who hides (TRS: "The Plan").

Knowing the Leoben model's ability to weave fact, fiction and outright lies into a confusing fabric of truth, half-truths and deceit, Adama wants the copy destroyed. However, he is overruled by President Roslin, who demands the model be interrogated.

Kara Thrace is assigned to interrogate Conoy aboard the Gemenon Traveler. Over the course of eight hours, Conoy demonstrates his ability to confuse and mix truth with lies: he claims to have planted a nuclear device somewhere in the fleet, but will not reveal where. He also mixes what appears to be religious mumbo-jumbo with penetrating insights into Colonial philosophy and Thrace's own past. While she resorts to ever-more drastic measures to obtain details on the alleged bomb's location, Thrace finds herself being drawn into Conoy's vision of life. So much so that when Roslin orders his execution, Thrace very much empathizes with him.

When he grabs Starbuck by the throat during her interogation of him, he suddenly has a vision of them together on New Caprica with Casey, her interactions with the Virtual Leoben and her death which is presumably what causes him to pursue her so much later to help her complete her destiny (TRS: "The Plan").

Prior to his death, Conoy reveals there is no bomb, and uses a reason suggested by Thrace in the initial stages of his interrogation: that since he is so far from other Cylon centers of influence, he cannot transmit his "soul" back to home should his body die. However, his true colors are revealed when President Roslin arrives aboard the ship and he manages to whisper to her that Adama is a Cylon — thus planting a seed of doubt between her and Adama. [1] Convinced now of the danger in keeping Conoy alive, Roslin orders him ejected from the Gemenon Traveler's airlock.

Interestingly, Roslin had a premonition of Conoy's surfacing in the Fleet — she had a dream about him at the same time he is captured. Later, in her cabin on Colonial One, she has a vision of him talking to her which prompts her decision to visit him in person — thus allowing him to complete his mission.

At the time of the dream and the vision, Roslin assumes that both are the result of her using chamalla to treat her cancer. However, both may have been the result of some form of psychic ability on the part of Conoy or Roslin. One last such incident is the correct foretelling by Conoy that the Fleet would eventually find the legendary homeworld of Kobol, home of the Gods and birthplace of mankind, although he might have simply extrapolated that from the Fleet's course (TRS: "Flesh and Bone").

In a bonus scene for "Taking a Break From All Your Worries", Caprica-Six indicates that this Conoy did in fact download into a new body and tell the Cylons about his experiences.

Though never directly stated, it is heavily implied that this Conoy is the same Cylon previously interrogated and tortured by Thrace.

Number Two is the only Cylon who does not appear to concern itself with the business of occupation and government of the planet, being conspicuous by his absence in meetings aboard the grounded Colonial One. The only copy shown on New Caprica is the one discussed below. 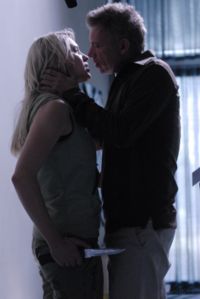 During the Cylon invasion of New Caprica Conoy slips into Kara Thrace's and Samuel Anders' tent and asks the ailing Anders where Thrace is (TRS: "Lay Down Your Burdens, Part II").

This Conoy copy kidnaps Thrace and holds her in an apartment located within the Cylon complex built in New Caprica City, shortly after the Cylon occupation of New Caprica. The apartment's design is identical to that of Thrace's former apartment on Caprica.

Ostensibly, the Conoy attempts to befriend her with food and politeness in a reverse-Pygmalion attempt to appease her, and perhaps to convert her to the Cylon monotheistic religion.

Conoy takes a dramatic tactical change and introduces Thrace to Kacey Brynn, a young child appearing to be two years old. He claims that Kacey is his and Thrace's biological daughter, created using his genetic material and one of Thrace's ovaries recovered from the ruins of the farm she was held in on Caprica. Whatever the truth of Kacey's origin, Conoy successfully uses the child to break down Thrace's resistance after the child suffers an accident that Thrace blames herself for. The Cylon surprisingly finds Thrace taking hold of his hand at Kacey's hospital bedside (TRS: "Precipice").

During the Battle of New Caprica, he leaves to presumably help in the attack and is forced to knock out Thrace after she attempts to find out what is going on. Thrace later returns to the apartment to find Kacey, and Conoy appears with Kacey. He uses Thrace's frantic desire to take Kacey during the evacuation to force her to say she loves him, which she reluctantly complies. They kiss for several moments as Conoy is unaware of the knife Thrace acquired earlier. She stabs him in the stomach and kills him one final time as he collapses on the floor.

Despite Thrace's bond to Kacey, it turns out the girl was simply a human child kidnapped on New Caprica. She discovers this when Kacey's rightful mother claims her aboard Galactica (TRS: "Exodus, Part II").

This copy arrives on the Demetrius proposing an alliance between Natalie's rebel faction in the Cylon Civil War and the humans. He also plays his usual mind games, telling Kara Thrace that he can see that she has a single purpose, and that he sees an angel of God in her. He also interacts with Samuel Anders, telling him to work out his relationship with Thrace if he hasn't done so already. He refers to Anders' destiny and "singular moment of clarity" though he is unaware of the fact that Anders is one of the Final Five that his faction is searching for. He later brings Thrace and a small group in a Raptor to the Rebel basestar where he insists on taking Thrace to see the Hybrid despite resistance from Natalie Faust. He witnesses the Hybrid's message to Thrace and helps decipher it. (The Road Less Traveled, Faith).

It is unclear whether the copy who forms part of the Rebel command triad along with Natalie and an Eight is this copy or another Number Two (TRS: "Guess What's Coming to Dinner?").

Leoben joins the landing party to original Earth and is shocked by what they find there (TRS: "Revelations"). When Kara searches for the source of the signal that led them to Earth in the first place, Leoben goes with her. As time goes on he becomes increasingly nervous about what they're doing and tries to disuade her, telling her, "You might not like what you find." They find some wreckage and Kara is shocked when Leoben reads the number on it as its her own Viper. They soon find the cockpit with what appears to be Kara's body. Kara screams at Leoben, to explain what she is, but for once Leoben doesn't have something to say. He is at a loss for words, and runs off in fear (TRS: "Sometimes a Great Notion").