The Raptor is a vehicle utilized by the Colonial military. A versatile craft, it is designed to perform multiple roles, but the Raptor most commonly takes part in reconnaissance and scouting operations. There have been at least two variants of this design in use by the Colonials since the outbrake of hostilities with the Cylons.

The First War era Raptor (also known as "flying pillboxes", or "buses") is little changed from its later counterpart, but features a longer cabin with an aft-facing gun emplacement. This design also relies on the main sublight engines for maneuvering.

This design was considered by the Colonials to generally be slow, and an easy target for Cylon forces to attack and destroy. However, it was not impossible to eliminate enemy targets while flying one.

The Raptors of this type are eventually replaced by their modern counterparts (TRS: "Razor Flashbacks").

It is not known if this design commonly carries FTL drives, like their later counterparts do. Ten years into the War (42 BCH), and Raptor 909 does not carry one, however, a statement by Galactica CO Silas Nash suggests that the Colonials do utilize smaller FTL capable ships. It is possible that the FTL drive and related components were removed in order to enlarge the cabin, and to accommodate the "Toaster Slayer" cannon.

The main flight deck / cabin of a Raptor is fully pressurized. However, crews operate in flight suits and helmets to help protect them against any hull breach. The cabin can also be depressurized and used in space rescue operations.

Raptors of this era are more commonly armed that the later design. This design can be outfitted with mission specific ship to ship missiles, incorporates a rear cannon, and is equipped with electronic countermeasures for defense (Blood and Chrome).

The Raptor is usually operated by a crew of two (one pilot and one ECO), has synthetic gravity on board, and is controlled by means of a fly-by-wire system (TRS: "Rapture"). It is capable of atmospheric flight and is also equipped with a short-range FTL engine, allowing it to make short faster-than-light hops. The vehicle has been a mainstay of the Colonial fleet for over 40 years, having entered service sometime prior to the twelfth year of the first Cylon War (TRS: "Razor Flashbacks", Episode 3). Its versatility and reliability in various roles has likely prevented it from being phased out by newer Colonial craft.

As a scout, Raptors can:

When scouting, Raptors can operate independently, or in concert with other Raptors and Vipers (TRS: "The Hand of God").

In addition to reconnaissance and scouting, the Raptor can also undertake the following roles:

In the transport role, a Raptor is capable of carrying around eight to ten adults in addition to the two-person crew. In the assault role, it can carry a squad of some eight equipped Marines (TRS: "Bastille Day").

The Raptor is designed for atmospheric as well as space-based operations. However, a critical element for atmospheric operations is that to remain airborne requires fuel: once in an atmosphere, the engines must be run constantly to maintain lift and to hover. Depending on the composition of the atmosphere itself, this can place severe strain on the Raptor's engines (TRS: "You Can't Go Home Again").

Raptors are fitted with small, general purpose FTL drives, but unlike larger drives on capital ships, they seem to be limited to ten to twenty FTL jumps, depending in part on the amount of tylium fuel being carried. A Raptor can also be outfitted with a Heavy Raider's navigational computer that, when operated by a Cylon, can be used to calculate and safely make longer jumps than normal (TRS: "Lay Down Your Burdens, Part I").

After allying with the Cylon rebels, Galactica's Raptors were updated with Cylon FTL drives, allowing them to jump further. (TRS: "Daybreak, Part I")

The main flight deck / cabin of a Raptor is fully pressurized. However, crews operate in flight suits and helmets to help protect them against any hull breach (TRS: "Miniseries"). The cabin can also be depressurized and used in space rescue operations. Re-pressurization takes 10 seconds (TRS: "You Can't Go Home Again", "A Day in the Life"). The forward pilot and co-pilot seats can eject in an emergency as the forward canopy is blown away prior to the ejection (TRS: "Dirty Hands"). 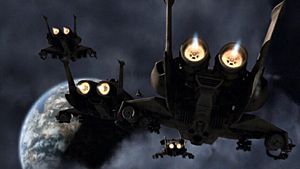 Raptors are normally unarmed as they make for a poor general-purpose fighter. The craft have an internal weapons bay capable of holding both offensive and defensive weapons. They are also capable of carrying heavy external armaments on four wing hardpoints, two wingtip hardpoints, and two fuselage hardpoints on the sides of the Raptor's body. Known weapons carried include:

The Raptor's contours provide it a reduced DRADIS signature to avoid detection. In addition, the craft carry an assortment of pods to aid in communications or defense as well as electronic countermeasures such as a jigger.[2] 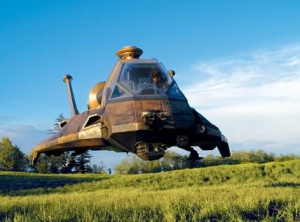 Raptor 312 taking off from the ground (TRS: "Miniseries").

The Raptor is an angular vehicle built for function, not aesthetics. The forward section consists of a flight cabin with side-by-side seats for the pilot and ECO, with a large bubble canopy providing wide fields of view both forward and side. The flight cabin opens into the main compartment where a workstation containing early warning, electronic countermeasures, and other equipment is manned by the ECO when not co-piloting the craft.

Access to the Raptor's main compartment is primarily through a large port-side hydraulic door, and a floor-mounted hatchway provides access through the deck. A pressurized docking skirt can also be extended from the underside, enabling the Raptor to dock to the hulls of other vessels. In assault missions, marines can use this skirt to breech a hull and board a hostile vessel (TRS: "Bastille Day").

Aft of the pressurized area are the FTL drive and main sublight engines. Port and starboard stub wings provide additional lift during atmospheric flight, and winglets reduce drag and provide step access to the wings and hull. RCS thrusters are placed throughout the craft for landing, maneuvering and stabilization (TRS: "Miniseries").

A civilian "Search and Rescue" Raptor is utilized by medical facilities to airlift patients to nearby hospitals. These craft were used after the renewed Cylon attacks to evacuate injured persons from the rubble of targeted cities. After the attacks on Picon, John Cavil took an injured Ellen Tigh to one of these Raptors, which made its way to the Rising Star before escaping with Galactica at Ragnar. These craft have a red/white paint scheme which differentiates them with their military counterparts.

It is presumed that the remaining fleet is destroyed or captured by Cylon forces during their occupation of the Colonies (TRS: "The Plan").

Alternate Raptors with different color schemes are in use up to the Fall of the Twelve Colonies. One such Raptor can be found in a floating dock off the coast of Picon, near the Club Pink Moon that Ellen Tigh frequents before the Fall, with a two-tone green and white paint scheme (TRS: "The Plan"). 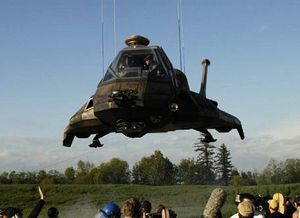 Shooting of the Miniseries.

Richard Hudolin explains: "The Raptor is made out of foam on a steel frame. We built it so that we could have people safely in there as a 100ft crane picks it up and swings it around. The actors were a little bit surprised: 'Oh, my God, it goes up that high!'"

It's custom-built and then it's painted. We have painters who are literally standing by on the day to add to it before the camera rolls [the wires are removed digitally later in post production]."

"The actors are rehearsing and we have people aging [the Raptor], adding the gunshot hits. One day we had to paint it up as if it had crashed and been on fire - the next day it had to be made pristine again." [4]