Commander Lee Adama of the battlestar Pegasus has serious doubts about the success of the New Caprica rescue mission by Galactica. On New Caprica, Saul Tigh decides the consequences for his wife's betrayal of the Resistance. Aboard Galactica, Admiral William Adama executes a dramatic rescue plan. 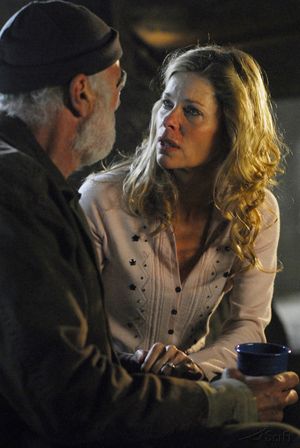 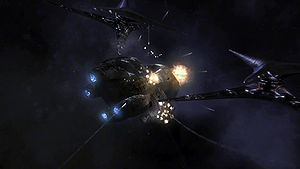 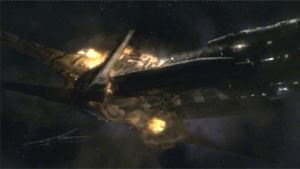 Pegasus rams into a Basestar.

Dualla: Hoshi's working on updating our map coordinates for the search for Earth. Civilian captains want to meet with you. They have questions, problems... [He is silent.] Talk to me, Lee.
Lee: I'm having trouble... accepting this.
Dualla: I know. But we have to push forward. Keep the Fleet together. Find Earth.
Lee: Right. That's our duty.
Dualla: There's still a chance they'll come back. Your father has pulled off more than a few miracles in his day.
Lee: I know that. And I haven't given up hope.
Dualla: Yes, you have. I saw the look on your face when you came back from Galactica. Like you were never gonna see him again.
Lee: Am I that easy to read?
Dualla: Just to me.
Lee: He's taking on too much for one half-strength Battlestar to handle. And that's not opinion. That's military fact. He's not coming back from this. None of them are.
Dualla: All we can do is make plans for the future. We have to survive. We have to find Earth. If we don't, they'll be no one to remember a man named William Adama. Or a Battlestar named Galactica. That is our charge to keep.
Lee: To keep humanity going. No matter what the cost. No matter -- No matter who we leave behind.
Dualla: You can do this. You can get us there. You are Commander of this Fleet, and you will guide us to safety. And you will do it no matter the cost. Because you're an Adama.
Lee: Did I ever tell you how proud I am to serve with you?
Dualla: Not in so many words, no.
Lee: Well, I am proud to serve with you, Lieutenant. And to call you my wife. [They kiss.] Now let's talk about... map coordinates, meeting with ships' captains.

Number Three: What would you have us do, Gaius?
Gaius Baltar: Leave. Pack up your centurions, and go. Please. Go.
Number Three: And then what? What would you do if we really just left you here? You'd live out your lives in peace and never trouble yourselves with thoughts of us again? Or would you raise your children with stories of the Cylon, the mechanical slaves who once did your bidding, only to turn against you? Killers who committed genocide against your race, the occupiers of this city until we just ran away? Would you tell them to tell the story to their children, and to their childrens' children, and nurse a dream of vengeance down through the years so that one day they could just go out into the stars and hunt the Cylon once more?
Gaius Baltar: Blood for blood ...has to stop one day.

Zarek: You're coming, aren't you?
Roslin (gestures to Colonial One): My ship's up there.
Zarek: You sure have a sense of the dramatic.

Admiral Adama: Then that's it. It's been an honor.

Dualla: Alright, people, let's move. Out! Let's go. (To Lee): You too, Commander.
Commander Lee Adama: Yes, sir. (Begins to leave, then stops and looks around at Pegasus): Thank you.

Admiral Adama: I guess you didn't understand my orders.
Commander Adama: I never could read your handwriting.

Adama: You did it. You brought 'em home, Saul.
Tigh: Not all of them.