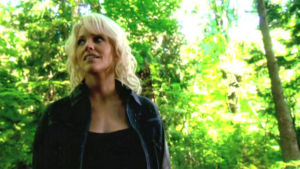 Projection is a Cylon ability that allows them to consciously induce an extraordinarily realistic hallucination in the form of an artificial environment around themselves, which they can choose to share with other Cylons.

Cylons use this ability as a way to detach themselves of reality, and experience the world around them as they wish to, rather than how it is, serving as a psychological comfort.

Projection can also be used as a means to navigate the confusing hallways of a basestar, and presumably other Cylon vessels as well, as hallways are uniform without discernible identification.

Projection was first observed when Caprica-Six projects a lush green forest during a discussion with Baltar aboard the basestar. However, promotional photography and deleted scenes show Number Three projecting cathedral environments. In interviews, Matthew Bennett mentioned that the Doral model projects a nightclub.[citation needed]

The revelation of this ability to Gaius Baltar has made him suspect himself of being one of the final five Cylons, for it is undeniably similar to what he has been experiencing with the virtual replica of Number Six which exists in his head, as well as various environments he has shared with her (TRS: "Torn"). However, that may not had been a demonstration of native ability on the part of Baltar but Virtual Six's helping him, particularly since Baltar has been shown not to be a Cylon. It is possible any human could have the innate ability to project with the aid of a virtual being or by themselves through training of the mind.

Later, with the help of Virtual Six, he apparently projects himself and virtual Six on a beach, where they engage in sexual intercourse in order to block or distract Baltar from the effects of torture inflicted by Number Three for his omission in reporting a dangerous beacon found near the Lion's Head Nebula (TRS: "A Measure of Salvation").

During Sharon Valerii's second incarceration aboard Galactica, she brings Galen Tyrol into a projection she created showing the two living an idyllic life on Picon with a daughter named Dionne. When Valerii later escapes and kidnaps Hera Agathon, Tyrol conjures up the projection by himself (TRS: "Someone to Watch Over Me").

Tyrol projects himself into a tranquil setting near a waterfall while incarcerated in Galactica's brig for helping Valerii escape (Islanded in a Stream of Stars extended version).

Hera Agathon has also demonstrated the ability to project and share projections. (Islanded in a Stream of Stars)