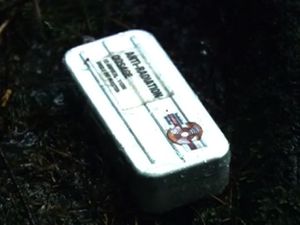 A package of anti-radiation medication included with Helo's medkit (TRS: "33")

Colonial medkits include syringes for injection of anti-radiation medication.

This medication is likely designed to allow certain tissues of the human body (typically, the thyroid gland) to block or resist absorption of radiation that proceeds nuclear bomb detonations.

Anti-radiation medications create nausea in many cases ("33", "The Passage")

Helo periodically injects himself in the neck (the location of his thyroid gland) to ward off the effects of Caprica's nuclear bombardment as he sought a way off the planet and back to Galactica (TRS: "33").

Kara Thrace gives herself a shot when she arrives on Caprica to retrieve the Arrow of Apollo, but injects the drug into her arm (TRS: "Kobol's Last Gleaming, Part II").

Samuel Anders and his team, the Caprica Buccaneers, escape the initial destruction, then later, as the organized Caprica Resistance, raid old Colonial Fleet supply depots for anti-radiation medication and other supplies (Resistance).

The Raptor pilots of the Fleet are routinely injected with anti-radiation meds as part of their series of escort flights through a highly-irradiated star cluster (TRS: "The Passage").