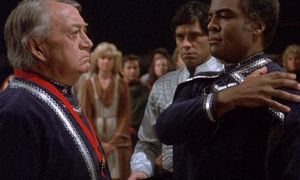 Commander Kronus is awarded the Star of Kobol (TOS: "Take the Celestra"). Some Different Angles of the Star

The Star of Kobol is an award bestowed at the Quorum of Twelve's discretion.

According to Sire Domra in his speech to Commander Adama, such an award was an honor that no "living Colonist had been given in over a millennium".

The Quorum gives this award to Adama in order to sugarcoat the fact that they are relieving Adama over unilateral control of the Fleet (TOS: "Baltar's Escape").