This article covers the various depictions of Muffit from the tie-in novelizations, comic books, and other media. 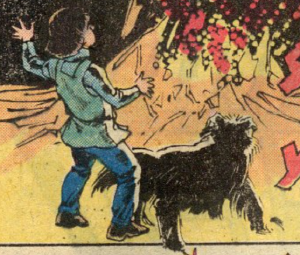 Boxey and Muffey during the Cylon bombardment of Caprica's cities (Annihilation!).

The original living daggit, Muffey, is slain during the attack on Caprica. After an aborted search for the daggit, Serina and Boxey head out of the city (Annihilation!). 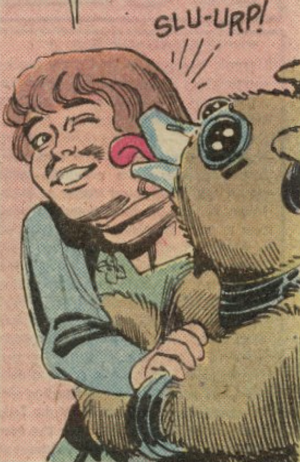 With no other living daggits surviving the holocaust, Dr. Wilker creates a robotic variant. Made aware of Boxey's mourning and moved to assist Serina in handling the depressed Boxey, Captain Apollo recruits Wilker's assistance for Boxey to "train" the robotic daggit. This new daggit, the Muffey II, is programmed to respond to Boxey's instructions (Exodus!).

During the deployment of landram search parties on Carillon, Boxey and Muffey II encounter the Ovions and are lead to the chancery, where they are subsequently reunited with Serina and Apollo. Boxey and Muffey II also uncover the Cylons in the mines of Carillon, which escalates into a standoff between the Cylon garrison secreted there and the subsequent evacuation of Carillon (Deathtrap!). 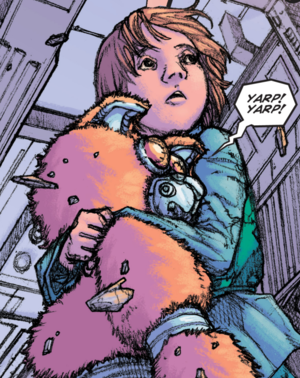 During the capture of Galactica, Freg reprograms Muffit to detonate the explosives that he plants aboard the Cylon personnel carrier that the Maytorians used to evacuate their homeworld. Upon successfully forcing the Cylons' retreat to their lone baseship, Muffit detonates the carrier, felling the Cylon forces and allowing the surviving humans to escape their home system (Classic Battlestar Galactica Vol. 1 #5).