For on depictions relating to this race across multiple separate continuities, see: Ovions (disambiguation). 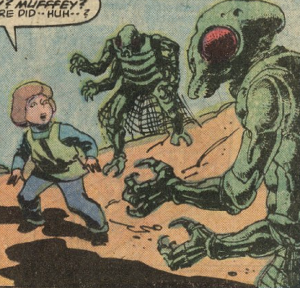 Ovions surround Boxey upon the darkened surface of Carillon (Deathtrap!).

Ovions are insectoid creatures who work the tylium mines of the planet Carillon.

The Ovions, also referred to as the Lords of Ovion by the Cylons, are occupants of Carillon. A communal order order from birth, all Ovions work and share, believing that such a system is peaceful and ordered: there is no competition, no jealousy. Eschewing happiness as "the goal of an immature order," the Ovion is content with such a communal system, as it has been so for millennia. As such, they align with the Cylons as a member of the Alliance, unbeknownst to the Colonials. 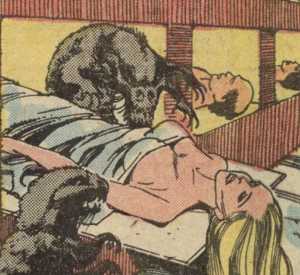 Ovion young feast on humans in the subterranean catacombs of Carillon (Deathtrap!).

The Ovions set up a lure for their human food supply in the form of a resort and chancery on Carillon, attracting humans from across the star system; they and their young feed on the unsuspecting humans, as humans would feast on cows. Captain Apollo and Lieutenant Starbuck uncover this, leading to the mass exodus from and destruction of Carillon (Deathtrap!). 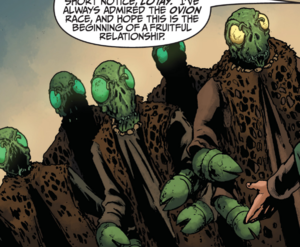 The Ovions originate from a place other than Carillon, and thus are something of nomads.

Baltar and their queen Lotay agree for the Ovions to work the rich tylium deposits of Carillon, for Baltar did not trust his own people to safeguard the secret of Carillon's wealth from either the Cylons or the Colonials.

For the Ovions, Baltar had them build a gambler's paradise on the planet, in which the den of sin allows none of its victims to lose—except their lives as a food source for the Ovions, for they were on the verge of collapse as a species (Battlestar Galactica Annual 2014).