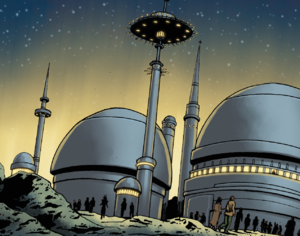 An unlikely chancery and resort on Carillon becomes the slaughterhouse from which the Ovions obtain their nourishment (Battlestar Galactica Annual 2014).

For this planetoid from the Original Series proper, see: Carillon.

Carillon is the dimly lit planet opposite the Nova of Madagon from the Twelve Colonies of Man.

Carillon is known to the Colonials as a tylium source, however it had been deemed too far from the Colonies to consider mining (Exodus!).

Following the Battle of Cimtar, the Fleet makes its fearful flight to Carillon via the Nova of Madagon, uncovering the largest mine for tylium in the star system. Overseen by the Lords of Ovion, who mine the tylium for the Cylons (unbeknownst to the Colonials), Warriors Starbuck and Boomer encounter a chancery and resort on is surface where humans are enticed and engorged. Eventually, Apollo and Starbuck uncover the horrifying connection between the two seemingly disparate operations: the Ovions use the chancery to acquire their foodsource, humans (and potentially other beings).

Effects from laser fire cause a chain reaction that destroys the planet, along with an orbiting basestar during the Battle of Carillon (Deathtrap!).

Between 7331 and 7332, Abel and a small expeditionary team of prospectors discover Carillon, and Abel sends that team away to hide its secret, which he has told only to Baltar: Carillon is rich with tylium deposits. Abel is slain by Baltar for this secret, Baltar recruits the Ovions under their queen, Lotay, to mine the tylium for him. Meanwhile, Baltar sends a falsified report on Carillon to Sire Damaris, who later releases Baltar from his contract with the Quorum of Twelve while in "mourning" for Abel.

Under this aegis of misinformation, Baltar oversees the operation and allows the Ovions to create a chancery and resort, where the house always loses—and so do its victims, for they end up being the Ovions' food source.

To prevent a Cylon invasion of Carillon, a la Cygnus, Baltar litters the tylium mines with radiation charges. The Cylons keep their distance and, over the next fifteen yahren, Baltar regales himself with the riches Carillon has yielded him, culminating in an offer from the Cylon Empire.

Believing that offer to be genuine, Baltar finds himself double-crossed by the Imperious Leader and loses claim to Carillon (Battlestar Galactica Annual 2014). The Ovions assume Baltar's mantle of ownership over the mine, and continue dealing with the Cylons until the planet's destruction (TOS: "Saga of a Star World").