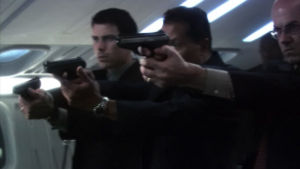 The presidential security service[1] is tasked with protecting the President of the Twelve Colonies of Kobol.

Hand-picked by Captain Lee Adama from civilians in the Fleet, the security service is responsible and answerable only to the President, with no allegiance to the Colonial military authority. They consist of former police, security personnel, or people with some kind of firearms training.

The PSS on Colonial One is a distinct entity from the military personnel aboard Galactica and Pegasus. Lee Adama himself has intentionally designed their organization in this way as he thinks they should have a separate command structure from the military organizations, so the lines of authority establishing who is under whose control would not be confused [2]. 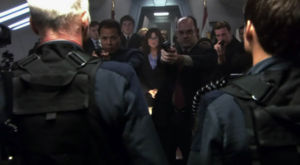 When Commander William Adama sends Marines led by Colonel Saul Tigh and Lee Adama to Colonial One to arrest President Roslin, they engage in a tense standoff with the security service. Eventually, Apollo pulls a gun on Tigh, then Roslin orders Adama and the security service to drop their weapons, preferring to leave peacefully (TRS: "Kobol's Last Gleaming, Part II").