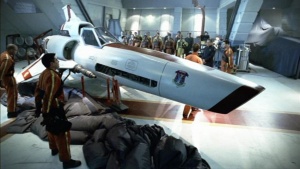 Viper N7242C being presented to Commander Adama after being restored by Deck Crew 5 (TRS: "Miniseries").

Viper N7242C is a Viper Mark II spacefighter which was apparently the favored craft of William "Husker" Adama during much of his service in the Cylon War. It was found "rusting out in a salvage yard on Sagittaron" by Galen Tyrol, who restores it to operational condition and presents it as a token of thanks to his retiring commanding officer.

The fighter is flown by Adama's son, Lee "Apollo" Adama, in a flyby performance during Galactica's decomissioning. The younger Adama is assigned escort duty for Colonial Heavy 798 back to Caprica. When the Cylon Attack begins without warning, the fighter's comparably antiquated systems proved impervious to Cylon infiltration attempts. Adama successfully protects Colonial Heavy 798 and its passenger, Laura Roslin, long enough for them to gather a sizeable refugee fleet of other stranded civilian ships and rendezvous with Galactica at Ragnar Anchorage.

At the subsequent battle to escape a Cylon blockade, Apollo, now the battlestar's CAG, commands Galactica's defensive squadrons of Vipers from the same fighter. The ship is heavily damaged, loosing a wing and power after taking a severe hit, but returns to Galactica due to the timely intervention and unconventional flying of Kara "Starbuck" Thrace.

The damage to Viper 7242 is repaired amidst the constant Cylon attacks during the first week after the Fleet's escape from Ragnar (TRS: "33").

With Captain Adama piloting Viper 2276, 7242 is flown by Louanne "Kat" Katraine during the battle near Kobol while Galactica computes the location of the lost Fleet (TRS: "Scattered").

7242, with the serial number 7242NC, and once again piloted by Lee Adama, is one of the alert fighters scrambled to intercept the unknown craft that turns out to be the battlestar Pegasus (TRS: "Pegasus").

After the Fleet's arrival at the second Earth, Admiral William Adama ceremonially piloted 7242 off of Galactica as the last Viper and last crewman to depart the ship. For the occasion, the fighter was restored once again to its wartime appearance with a tail number of N7242C and the pilot's nameplate reading "Lt William 'Husker' Adama" (TRS: "Daybreak, Part II").