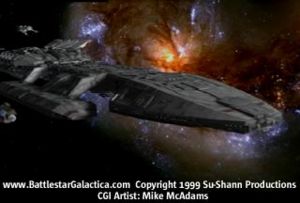 Image from the "making of" the Battlestar Galactica: The Second Coming trailer

The Battlestar Galactica: The Second Coming project was a proof-of-concept, professionally-created mock movie trailer created, produced, directed, and starred by Original Series star and Galactica spin-off author Richard Hatch. Under his production company, Su-Shann, Hatch leveraged the talent of many TOS stars, including John Colicos, in an effort to convince Universal Studios, the owners to the rights of the Battlestar Galactica franchise, to greenlight a new series or motion picture.

The elaborate trailer features new concepts, impressive acting, and very exciting special effects. Hatch visited many science-fiction conventions to show the trailer and it proved to be a hit among fans that viewed it.

However, Hatch never succeeded in getting Universal's attention. The BSG project revival would be first given to Tom DeSanto and X-Men director Bryan Singer in coordination with Fox Studios and USA Television in 2001. After that project dissolved primarily due to the withdrawal of Fox Studios as well as Singer's commitment to a second X-Men movie, USA Networks chose Ronald D. Moore and David Eick to create a new project, which would be a near-complete rewrite of the series, with familiar names, characters, and places, but with none of the original actors as their original characters, and with a much darker overtone.

Despite initial doubts about the series, Richard Hatch was happy to join the new Battlestar Galactica TV series cast as the recurring character of terrorist-turned-politician Tom Zarek.

The four minute trailer begins with a shot of outer space, and a voiceover by Hatch:

"It was the seventh era of mankind. Twenty yahrens have passed since the last great war. A civilization was reborn, an enemy had grown, and now a new generation will have to face an old foe. I must prepare them for the second coming." The foot of a Cylon steps onto the screen. Then we get a close-up of the Cylon's face. He says, "By your command." Then we see a group of Cylons. They all look very similar to the originals. The one in the center says, "It is done, Imperious Leader." Apollo then appears and says, "I must prepare them for the second coming."

Next, there are some shots of vipers flying over the surface of a planet while evading some kind of anti-aircraft guns. In a medical room, Dr. Salik (played by George Murdock, the original actor) tends to Apollo who is lying down. Salik says to him, "It's been five yahrens since we last saw a Cylon. They no longer pose a threat." Apollo answers, "They have evolved." An upgraded version of a Cylon basestar appears, and then the Gemini freighter is destroyed (which also happens in Galactica 1980).

Viewers then see the face of Baltar who has a large scar on his cheek and is wearing a hood. He says "Greetings." Moments later, he continues: "There's been a Cylon civil war. A new and more lethal species of Cylon has emerged. Let me say that you're all in great peril. And only I can lead you to safety." Viewers see shots of Colonial Warriors battling Cylons, and an Imperious Leader with a new look.

Athena is played by Szilvia Naray who looks similar to Maren Jensen. She says, to a man standing near her, "My brother is leading us down a dangerous path." An entire planet explodes. Apollo runs from a fiery blaze.

There are shots of Colonial Warriors training, doing one-arm pushups. Colonial Vipers hang above them. Bojay says to Apollo, "Your son's gonna make a fine pilot." Apollo answers, "Yes, he is." There is a close-up shot of Troy (the grown-up Boxey), who is played by Mickelean McCormick. Apollo also says, "These cadets have no idea what they're in for." There are various shots of a space battle between Vipers and Raiders among ships of the Fleet.

There is a brief shot of Apollo standing next to Tigh, but no words are said. There is a shot of a Colonial city on a planet, so apparently the Colonials have settled. There are more shots of space battle scenes with Colonial Vipers and Cylon Raiders. There is a Super Cylon basestar, which is about six times larger than the regular Cylon basestar. The Vipers and Raiders look very close to the originals. A few upgraded Vipers appear. There is a shot of Colonial Vipers shooting out of Galactica's launch tubes.

Near the end, Baltar appears again and says, "Your friend Starbuck, he was alive last I saw him. I'm sure he's dead by now." Apollo challenges Count Iblis, who is played by Richard Lynch (the same actor who played Wolfe in "The Gun on Ice Planet Zero" and the time-traveling villain Xaviar in "Galactica Discovers Earth"). Apollo says, "How dare you? You care about no one but yourself in your quest for power! And mark my words, I will not stand by and watch the human race bow down and be defeated once again!" Moments later, Iblis says, "We have them right where we want them." Baltar says, "Your friend, Starbuck... he was alive when last I saw you. I'm sure he's dead by now."

Moments later in another segment, Apollo tells Athena, "Starbuck's alive. I know it." Athena answers, "If you leave, I will replace you." Apollo says, "Prepare the fleet for battle". A hologram of Adama is speaking to Apollo. He says, "We're in a life and death struggle for survival. We need heroes." (This is from "The Living Legend")

There is a new version of the Ship of Lights. Colonial vipers are launching toward a large phalanx of upgraded Cylon Raiders. One of the pilots says, "Starbuck, here we come." The Galactica destroys a Cylon basestar. It all ends with close-up shots of the main characters, and then the words "Battlestar Galactica: The Second Coming."