Zephyr is a FTL-capable civilian passenger liner that manages to escape the destruction of the Twelve Colonies to join the Fleet of surviving Colonial ships (TRS: "Miniseries"). After the destruction of Cloud 9, it acts as the Fleet's rest and recreation vessel.

Zephyr has many features that set it apart from other Fleet ships.

The most notable of these is the ship's ring. Spinning counter-clockwise to create centrifugal force for a sensation of gravity, the ring is home to a biological habitat, populated with trees, water, and buildings for visiting Colonials to utilize and enjoy. The habitat is enclosed by a glass facade, which leaves views of the aft end of the ship and of the opposite side of the ring to anyone looking up. The ring is supported by four main pylons that connect the ring to the rest of the vessel.

The second noteworthy feature is the ship's sublight engines. Compared to the more traditional chemical thruster boosters of other Fleet ships, Zephyr has an engine assembly that closely resembles that of an electric powered drive.

Post-Fall, New Caprica, and Beyond

During the attack on the Colonies, Zephyr is one of the first vessels to be found and shepherded by the newly sworn-in president, Laura Roslin. Having an FTL system, it escapes to Ragnar Anchorage to rendezvous with the battlestar Galactica, where it enters the upper atmosphere of Ragnar and waits with other surviving ships. Commander William Adama is prepared to leave the civilians at Ragnar while Galactica goes to fight, but Roslin convinces him to take Zephyr and the rest of the civilian ships and flee the Colonies (TRS: "Miniseries").

After the settlement of New Caprica, Zephyr remains in orbit of the planet, its configuration possibly making atmospheric entry impossible. It escapes with Galactica, Pegasus, and the rest of the Colonial vessels that remain in space when the Cylons make an unexpected appearance (TRS: "Lay Down Your Burdens, Part II").

Zephyr is among the first Fleet ships taken through a massive star cluster towards the so-called algae planet (TRS: "The Passage").

The ship is home to Baltar's first lawyer in his treason trial, Alan Hughes. (TRS: "The Son Also Rises"). 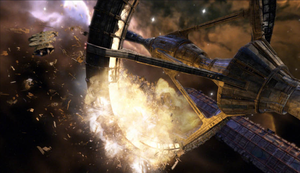 Zephyr, along with the rest of the Fleet, momentarily loses power after jumping to the Ionian Nebula, disabling its FTL drive. As the Fleet attempts to recover, it is discovered by a Cylon task force (TRS: "Crossroads, Part II"). The Cylons strike at the civilian vessels, launching two missiles at Zephyr from aft and obliterating a large section of the ring. Zephyr continues to leak oxygen and other debris even after the battle (TRS: "He That Believeth In Me"). The damage is eventually repaired, the ring becomes habitable once more, and Zephyr continues on with the Fleet toward Earth (TRS: "Revelations"). 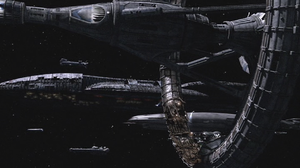 Damage to the ship is extensive, and takes months to repair

Several days after leaving Earth, Lieutenant Gaeta is on his way to Zephyr for rest and relaxation along with two Number Eights, Specialist Brooks, Lt. J. "Shark" Finnegan and "Easy" Esrin when an emergency jump and a malfunction separate their Raptor from the rest of the Fleet (TRS: "The Face of the Enemy").

Zephyr eventually makes its way with the remaining Fleet to a planet that would become the Colonials' new home. After the population is offloaded, the ship is guided by Samuel T. Anders into Sol and destroyed (TRS: "Daybreak, Part II").

The following information was previously available on the SciFi Channel website. It should be noted that information from that website, while being official, is unreliable and may be contradicted on screen: