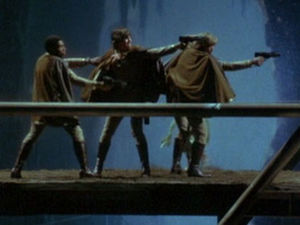 "Colonial Warrior" is a universal term to describe the highly-skilled Viper pilots and soldiers of the Colonial military. Warriors are extremely versatile in many combat roles, and are well regarded for extremely unconventional thinking for special missions.

Attrition, both from the destruction of the Colonies as well as the pursuit of the Cylons forces the Colonial military to recruit within the Fleet. Refugees who are between the ages of 16 and 46 yahren and not presently serving in a highly critical civilian occupation are encouraged to contact Galactica recruitment about applying for Warrior training (TOS: "The Man with Nine Lives").

Warriors wear a beige-colored uniform with a red-brown jacket with a laser pistol as the standard issue sidearm. On some occasions, they may also wear a small cape.

Shuttle pilots are not Warriors, but can be trained and promoted to this status (TOS: "Lost Planet of the Gods, Part I"). 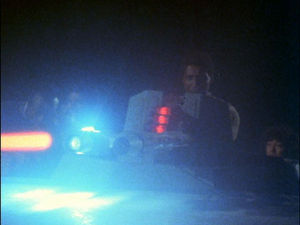 A Warrior mans a landram turret (TOS: "Saga of a Star World")

If it flies, a Warrior can pilot it. Warriors typically fly Vipers (TOS: "Saga of a Star World"). They are capable of piloting shuttles, both modern (TOS: "The Gun on Ice Planet Zero, Part I") as well as obsolete freighter shuttles (TOS: "The Long Patrol").

Additionally, Warriors can fly enemy fighters, such as the Cylon Raider (TOS: "The Hand of God"). 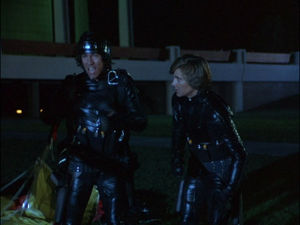 Warriors are capable of fighting off or leading conventional ground assaults (TOS: "Saga of a Star World"). 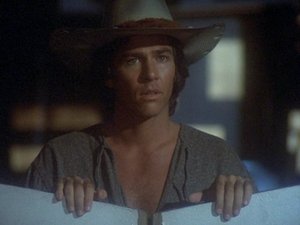 Some people call him a space cowboy... (TOS: "The Lost Warrior")

Colonial Warriors are trained in basic vehicle maintenance and repair. This allowed Warriors to use the damaged electronics from two Vipers to cobble together one functioning Viper (TOS: "Greetings from Earth"). Their vehicle repair skills proved enough to diagnose the damage caused by the laser pistol to the snowram on Arcta, but the damage was beyond repair (TOS: "The Gun on Ice Planet Zero, Part I"). Warriors were dispatched to the civilian vessels of the Fleet in order to check for solium leaks (TOS: "Saga of a Star World"). Some Warriors are even capable of advanced electronics tasks, such as clearing up and boosting Gamma frequency reception (TOS: "The Hand of God").

Warriors are the only known participants in the Triad competitions. They are also capable of serving as Protectors (defense counsel) in a murder trial (TOS: "Murder on the Rising Star").

Colonial Warriors have been trained at a training facility simply called the Academy for "over two thousand yahren". Instruction at the Academy was done over a seven yahren program where their "mental, physical and moral capacities" were pushed "to their limits". When the Academy was first founded, it trained the sons of Caprican bureauticians for military service with an emphasis on "the strategy of intercontinental warfare, and hand-to-hand martial arts that were obsolete even then". Non military training of the first Warriors was "limited to the study of the dead languages of the Elders of Kobol and the memorization of the ancient texts".
Later, it opened up to both women and members from other colonies. It was during the time of peace that the Academy became driven away from its goal as a military academy, and became an academy of arts and sciences; the Thousand-Yahren War changed this and became, yet again, a place that trained Warriors versed in ethics, literature, music, exobiology, the human and nohuman social sciences, astrophysics and battle-related skills.[1]