Conquest of the Earth (VHS)

Conquest of the Earth is a VHS release, although it was also given a short theatrical release overseas. It contains edited and spliced together versions of "Galactica Discovers Earth" and "The Night the Cylons Landed", with footage from the Original Series.

Far out in space, the ship Battlestar Galactica has at last found its long sought haven - Earth. Unfortunately, not far behind are their mortal enemies, the Cylons, who are determined to wipe out every Earthling in the Galaxy. The exciting action travels at warp speed through the Galaxies where life-and-death laser battles take place. Lorne Greene stars as Commander Adama in this thrilling space adventure in which the sky is literally the limit. So get ready for flying motorcyles, fabulous costumes and smashing visual effects as the Cylons and the Galacticans battle over the Conquest of the Earth.

To read a review of this telemovie, click here. 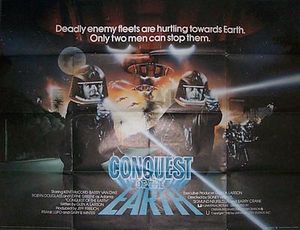 The theatrical poster for Conquest of the Earth.