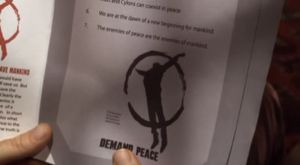 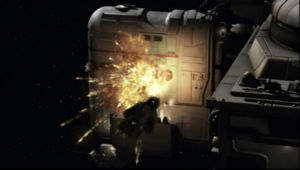 Demand Peace is an extremist organization (operating out of Cloud Nine) led by Royan Jahee that seeks peace with the Cylons. Their ideology has gained significant traction amongst the civilian population of the Fleet who believe surrender to the Cylons is preferable to a life on the run. The movement grew increasingly popular after Admiral Helena Cain and the battlestar Pegasus joined forces with Galactica, as Cain's methods to fight the Cylons (from stripping civillian ships for supplies to other abuses) and her subsequent death served as a rallying cry, feeling this and the oppression by the Fleet to prevent Cylon sabatoge made them no better than the Cylons who hunt them down.

The group's first known action begins by sneaking a Demand Peace mole, Asha Janik, aboard Galactica to work as a civilian munitions worker. While there, she sabotages Galactica's Vipers by producing faulty hollow-rounds for the fighter's guns. Galactica's crew members later capture and interrogate her. The next act of sabotage takes place about the tylium refinery ship Daru Mozu, where Demand Peace members aboard the ship detonate a bomb close to its FTL drive.

Dr. Gaius Baltar secretly provides the group a nuclear warhead (given to him to make his Cylon detector by then-Commander Adama) in order to aid the future plans of Demand Peace member and possibly disaffected Cylon agent Gina Inviere. After his election to the presidency, Baltar visits Inviere aboard Cloud 9, saying that his election should allow future opportunities for time together. Inviere informs him that she will not go to New Caprica, and Baltar responds that he can no longer visit her under such circumstances. At the last moment, Inviere overcomes her prior reluctance to have sex with Baltar, but after hearing Baltar sworn-in as president kills herself by detonating the nuclear warhead aboard Cloud Nine. Several ships are destroyed in the process, also revealing the position of the Fleet to the Cylons, but whether this side-effect is intentional is not known.

The fate of Demand Peace and the remainder of its members after Cloud Nine's destruction is left in doubt (TRS: "Lay Down Your Burdens, Part II"). It is probable that any survivors of the group and its cause lose their influence after the conflicts that stem from the Cylon occupation on New Caprica one year later. 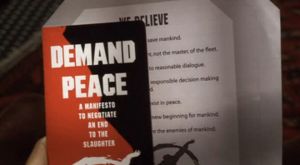 
A MANIFESTO TO NEGOTIATE AN END TO THE SLAUGHTER


[...] the war. The answer to our suffering lies in negotiating a peace. This is our cause. This is your cause.


OUR CAUSE WILL SAVE MANKIND

Commander Adama would have you believe that he will save us. But can one man claim to save the future of all mankind? Clearly the task is too great for a warrior. It demands the perspective of a statesman and a historian. In short a democratic council. Is this what we have? Despite lip service to the processes of democracy the truth is [...]

Additionally, Saul Tigh quotes the following passage: "Do not be afraid. We are not terrorists, but we will not sit back while Adama's war machine continues to press us into cruel and futile conflict."