The Blackbird is a short-lived, prototype Colonial stealth fighter designed by Galen Tyrol and built by many deckhands and officers on Galactica. 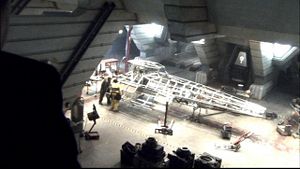 The Blackbird under construction.

Along with the usual RCS mechanisms for directional control, the Blackbird is powered by four obsolete DDG-62 engines that came from the flight deck of the Baah Pakal. Further, unlike other ships of its size, the Blackbird is FTL-capable.

Laura and her flight history 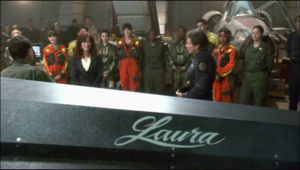 A close-up of the cursive on the side of the Blackbird.

The first prototype is dubbed "Laura" in honor of President Laura Roslin. Kara Thrace pilots the maiden test flight, where, after some initial difficulties with handling the ungainly craft, she handily eludes her escort, Lee Adama.

Colonel Tigh originally denounces the project as frivolous, but later provides assistance in procuring the DDG-62 engines. Others among Tyrol's own deck crew also at first consider the project a waste of time, as noted through their initial reactions to Tyrol's proposal. However, Commander Adama believes that the endeavor offers hope and purpose, and therefore permits it to continue despite the crisis with the Cylon logic bomb that has infected Galactica's systems (TRS: "Flight of the Phoenix").

When commissioning a reconnaissance on the Cylon fleet (containing a mysterious ship) Pegasus's CAG Cole Taylor, although knowing of the Blackbird, chooses to use Raptors for his mission despite Thrace's protests. Before his plan can be put into action Thrace, with assistance from Lee Adama, absconds with the Blackbird, claiming she is running a test flight for Admiral Cain. In reality, she undertakes the mission single-handedly without being detected, taking several close-range pictures. 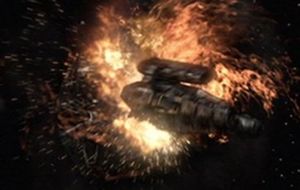 The destruction of Laura during the Battle of the Resurrection Ship.

The sudden, unexpected return of this Colonial craft causes it to be mistaken for a Cylon craft, bringing an end to the standoff between Galactica and Pegasus. Thrace transmits the images, and appeals over the comm that she is not a Cylon vessel. From discussing these photos with Gina Inviere, Gaius Baltar eventually details the name and purpose of the Resurrection Ship (TRS: "Resurrection Ship, Part I").

Laura is later piloted by then-Lieutenant Lee Adama in the battle to disable the Resurrection Ship's FTL drive, preventing her escape so that Vipers can destroy it. While Adama is successful, a collision with a disabled Raptor destroys the Blackbird and Adama is forced to eject (TRS: "Resurrection Ship, Part II").