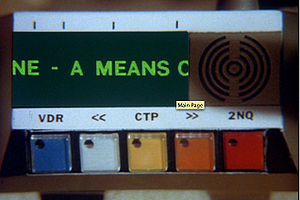 A readout from the wrist computron providing the definition of a "phone" (1980: "Galactica Discovers Earth, Part I").

A wrist computron[1] is a portable device carried by Troy and Dillon during their first adventures on the newly-discovered Earth.

The complete features of the wrist computron are not defined, but the device has four basic functions: communication, translation, data storage/retrieval and scanning capabilities.

The feature of personal invisibility, or the invisibility field, is devised by Doctor Zee after the discovery of Earth. He first demonstrates the invisibility field on a Viper on a launch platform, explaining beforehand that "each color and sound has its own frequency, some of which are too high to be perceived by the human eye or ear" and that by generating a "nuclear field in a frequency above the perception of Earth's conventional electronic equipment or even the human eye" whole ships or personnel can be rendered invisible.

The power cost, however, is too high for this to be used in all applications, and thus must be used only in "life or death" situations (1980: "Galactica Discovers Earth, Part I").

One feature, personal invisibility, is used by Willy Griffin to torment a bully, Tucker (1980: "Galactica Discovers Earth"). Later, the invisibility feature is used by Troy and Dillon to avoid questioning by the Federal Bureau of Investigation after thwarting a hijacking attempt on an commercial air plane (1980: "The Night the Cylons Landed, Part I").

Those using the invisibility field emitted by the device cannot see others who are also invisible using the same device; Troy and Dillon hold hands while quickly exiting the plane so as to remain in close proximity during their escape (1980: "The Night the Cylons Landed, Part I").

The computron is also capable of scanning communication frequencies, including those used by the Cylons (1980: "The Night the Cylons Landed, Part II"), medical probing, and making scientific analyses.

The computron's scanner can cause certain Earth machines to malfunction. This discovery first happens when Troy attempts to scan the phone in a phone booth, causing the phone to empty its coin box (1980: "Galactica Discovers Earth, Part I").

The scanner function is also capable of making medical diagnoses, and aided Troy in saving the lives of Moonstone and two other Super Scouts. It can also make scientific analyses, analyzing various mineral and chemical content (1980: "The Super Scouts, Part I").

It is also used by Dillon and Troy to translate Earth terms they do not understand (1980: "Galactica Discovers Earth, Part I"), in addition to providing information on the many aspects of Earth, including its locations and organizations (1980: "The Night the Cylons Landed, Part I").

The translation goes both ways, with a reverse lookup feature to look up Earth equivalents for Colonial terms. For instance, Dillon looks up the Earth term for "transmission band" and comes up with "television channel" (1980: "Galactica Discovers Earth, Part I").