The inception of the Super Scouts was largely a result of Galactica 1980's problematic "family hour" timeslot. Again and again, "Program Practices", the department of censors in ABC which monitored and suggested tone and content for its various shows, contacted series creator Glen Larson demanding more children in Galactica 1980. Already disatisfied with the show, Larson responded to the network by saying, "Okay. I'll give you kids crawling out of your ears."[1] The result was the Super Scouts, a band of Colonial children enhanced to near superhuman ability by the differential in gravity on Earth.

Dealing with the children on the set proved to be far more difficult than anticipated. They were either crying or laughing, or getting lost, and the crew would have to track them down to do the scene. Their needs required that a teacher and their parents be contacted constantly, even for the most minor of reasons, and they ended up being the only people more bothersome to the crew than the children. Additionally, they would only be available for a few hours each day of shooting[1].

Three of the children were Larson's own. They had appeared in the Original Series, during the episode "Greetings from Earth".

As of October 2004, Everett is a suspect in the murder of his wife Stephanie. According to police, on June 20, 2004, Stephanie learned of Everett's illegal selling of marijuana and decided to end their relationship. Later that night, Everett attempted to leave with their son Benjamin while his wife was asleep. She woke up and found him absconding with their son, and confronted him about it. He then proceeded to blugeon her to death with a dumbell. On December 23, 2008, he was shot to death by police in an attempt to end a hostage situation where he held his own son at gunpoint[2]. 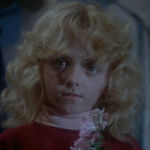 Georgi Irene portrayed Sunshine. Her acting credits also include Johnny Quest, Wildfire and Married With Children. She was nominated for two Young Artist Awards in 1988 for her voice over work in Johnny Quest and Wildfire. 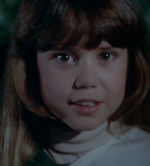 Lindsay Kennedy (born January 4, 1969) portrayed an unnamed Super Scout. He is one of the only Super Scouts to ever achieve any real notable fame for acting. Shortly after Galactica 1980, he played Jeb Carter in over 15 episodes of Little House on the Prairie. He also revisited the role in three television movies based on the series. His acting credits also include CHiPs and a character voice in Grand Theft Auto: Vice City. 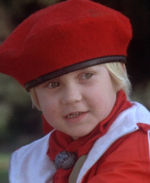 D.G. Larson as an unnamed scout.

D.G. Larson (born July 22, 1974), also known as David Larson, portrayed an unnamed Super Scout in Galactica 1980 and Baby Walker in the Original Series episode "Greetings from Earth". In addition to acting, he has writing credits that consist of seven episodes of Night Man. He is a son of series creator Glen Larson, and his only acting credits consist of series overseen by his father. 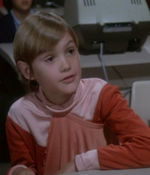 Eric Larson, also known as G. Eric Larson, portrayed Moonstone in Galactica 1980 and Todd in the Original Series episode "Greetings from Earth". His acting credits also include B.J. and the Bear, Demon Wind and Angel. He is a son of series creator Glen Larson.

Michelle Larson (born May 28, 1971) portrayed an unnamed Super Scout in Galactica 1980 and Charity in the Original Series episode "Greetings from Earth". She is a daughter of series creator Glen Larson. Galactica series are only acting credits.

Jerry Supiran (born March 21, 1973) portrayed an unnamed Super Scout. Overall, he became one of the more successful child actors to appear in the series, despite the fact that Galactica 1980 was his first role as a professional actor. He quit acting in 1988 for unknown reasons. His acting credits also include Highway to Heaven, Little House on the Prairie, Mr. Belvedere and Small Wonder, in which he was a recurring character.

Eric Taslitz (born June 14, 1966) portrayed an unnamed Super Scout. His acting credits also include Little House on the Prairie and The Rockford Files.